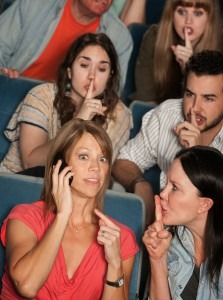 Audiences shush a woman taking a call at a concert
(Shutterstock.com)

For some concertgoers, the concert hall is a last bastion of decorum, but for others it’s an anachronism needing to loosen up its strict customs. While some disturbances are universally scorned, certain manners are less clear cut. We’ve gathered the five most hotly debated subjects of concert etiquette. Let us know which side you fall on in the comments box below.

No audience behavior sparks as much controversy as the act of clapping, particularly when it comes in between movements. Though impromptu applause and cheering were frequent through the turn of the 20th century, giving a hand anywhere but at the very end of a complete work has become a faux pas in the modern concert hall. While some critics have been calling for the end of what they consider an elitist and arbitrary custom, others defend its practice. The debate shows no signs of being resolved soon.

While the unsilenced cell phone will never be welcome at a performance (we hope), other elements of the smartphone are gaining traction in certain corners of the classical music realm, primarily as means of documenting and publicizing performances. Orchestras such as the Detroit Symphony have invited audience members to tape and photograph their concerts and post the videos and pictures on social media sites. “Certainly each and every ensemble must find new ways to reach the public these days,” wrote Leonard Slatkin, defending the decision on the Huffington Post. However, performers such as the pianist Krystian Zimerman have been outspoken against these bootleg documents. “The destruction of music because of YouTube is enormous,” he allegedly said, following an incident in which he suspected iPhone user of taping his concert.

When it comes to audience tendencies that annoy performers, the number one complaint seems to be coughing. This annoyance is rooted in suspicions that coughs aren’t due to illness but boredom. A recent German study supports that belief, finding that concert hall coughing is not random: it happens twice as often in the concert venue than normally. The same paper also found that coughing was particularly rampant in modern works and during quiet or slow movements. Conductors and performers have recently fought back by expressing their displeasure. Michael Tilson Thomas even threw lozenges from the stage to a hacking audience last fall. Meanwhile, etiquette sticklers say that if you truly are suffering from a cough be considerate of your fellow concertgoers and stay home.

Is booing a right granted to a paying public along with their freedom of expression or just a rude response? The debate rages. The latest development came when Alexander Pereira, the new maestro of La Scala, appealed to the loggionisti, who are notorious for hissing at stars like Piotr Bezcala, Renee Fleming and Roberto Alagna, to silence their jeers. Pereira hopes that a friendlier crowd would lure back offended stars who have vowed to never sing at La Scala. Only time will tell whether the paying seat-holders feel that expressing their displeasure outweighs Pereira’s casting needs.

Ironically, the people who are most ardently defending silence are the ones who are most disruptive to it. Yes, they are the shushers. Whether they’re provoked by murmurs, an unwrapped lozenge, or other rustlings, they let out a loud accusatory “Shush!” Their admonitions are more often than not more distracting than the noise from the initial offender. These self-appointed policemen of the audience have provoked the ire of Alex Ross, and Jay Nordlinger, among others. However, many a thankful concertgoer has benefited from a discrete request to hush up.