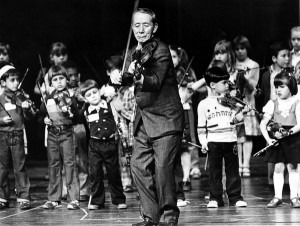 The more Japan’s global relevance in economic, political and military terms seems to decline, the more it cares about projecting soft power. The government’s “Cool Japan” project subsidizes “attractive products or services” that, according to the Ministry of Economy, Trade and Industry, “make full use of the unique characteristics of Japanese culture and lifestyle.” These include decorative washi paper, a cosplay-inspired clothing brand and a bonsai plant grown with renewable energy.

Despite this concern, both the Japanese government and the Japanese people seem unaware of the global impact of Japan’s most successful cultural export to date: the so-called Suzuki Method of music instruction.

Originally conceived in the 1930s by the violinist Shinichi Suzuki, the Suzuki Method proposes that all children can learn to play an instrument as naturally as they learn to speak their native language. According to the Talent Education Research Institute, an educational organization founded by Mr. Suzuki, about 400,000 children in 46 countries are now learning to play musical instruments the Suzuki way. But just 20,000 of them are Japanese. As the institute puts it, the method “has earned high acclaim overseas, more so than at home.”

It’s not the first time the Japanese seem to miss what of theirs is worth celebrating and need to be told by outsiders. Ukiyo-e woodblock prints were used as wrapping paper for export wares when Japan began trading with the Western world in the second half of the 19th century. They were soon “discovered” by European Impressionist painters, who hailed them as a distinct art form. Modern Japan has repeatedly overlooked the merits of its own artistic and cultural production out of a blinding insecurity about its international standing.

The Suzuki pedagogy was misunderstood from its very beginnings in the 1930s. Upon returning to Tokyo from Berlin, where he had spent most of his twenties, Mr. Suzuki found himself in high demand as a teacher. His first young pupils were conspicuously more skilled than others at the time — when classical musicians of any age were rare in Japan — and were soon heralded by the Japanese media as prodigies and geniuses.

Mr. Suzuki abhorred such terms. He believed that the sheer joy of making music or learning just about anything was accessible to all children. There was a pastoral element to his approach: Its main goal was not to mass-produce professional musicians but rather to mold individuals into sensitive and thoughtful human beings with “noble hearts.”

In “Powerful Education,” published in September 1941, Mr. Suzuki called for reforming Japan’s educational system; he argued that teachers were too quick to give up on children who lagged behind. He stressed the importance while, say, learning to play the violin of goal-setting, encouragement and repetition.

But this was too bold a proposal for the time. The Japanese empire had already embarked on its ill-conceived expansionist path, having started a war with China in 1937. Some of Mr. Suzuki’s young students were called unpatriotic for playing music during a national emergency.

In this oppressive atmosphere, the kind of sweeping change Mr. Suzuki envisioned, which required re-educating the educators, did not go down well. As Japan was beginning to lose yet another war it had started, this one against the United States and its allies, he wrote another book urging elementary school reform. The authorities prevented its publication.

The war eventually ended and then, in March 1955, less than 10 years after Japan’s utter defeat, Mr. Suzuki gathered some 1,200 children in a gymnasium in Tokyo. Black-and-white footage shows the 56-year-old Suzuki doing some lithe footwork on a makeshift podium and waving his bow like a wizard’s wand as he conducts the young violinists through difficult pieces, including Bach’s Double Concerto.

News of this group concert, the first Suzuki performance to attract national attention, reached the United States. American instructors traveled to Mr. Suzuki’s music school in Matsumoto, a scenic mountain town, hoping to discover the secrets of this Japanese miracle.

That concert was deemed all the more remarkable in the United States for seeming incongruous, because it featured Japanese children playing Western instruments. What’s more, had those young Japanese been born a few years earlier, they could easily have been among the soldiers American forces had fought. The Suzuki children represented the rebirth of a softer, gentler kind of Japan.

The rest of the world eventually took to the method because it worked. Starting in 1963, Mr. Suzuki regularly toured the United States with his Japanese students, stopping at the United Nations headquarters and Carnegie Hall. The Japanese government had little to do with this cross-cultural dissemination: Much of it was the work of Mr. Suzuki and his supporters, including Masaru Ibuka, Sony’s co-founder and himself a great early-childhood education advocate. By the 1970s, the Suzuki Method had become a worldwide phenomenon. Even in remote areas of India and Indonesia, places with no properly trained music teachers, people were learning to play instruments on their own, thanks to Suzuki-compiled repertoires of incremental difficulty.

In June 1979, when President Jimmy Carter visited Japan with his family, his daughter Amy had a group lesson with Mr. Suzuki’s niece, Hiroko Suzuki (the current president of the Talent Education Research Institute). At a time of heightening U.S.-Japanese trade friction, the episode marked a diplomatic success. Yet Mr. Suzuki was unsuccessful in his attempts to convince successive Japanese prime ministers to incorporate his approach in public education. In Japan, his method continued to be seen as a program for the exceptionally gifted.

Japan’s long failure to claim as its own a globally attractive philosophy like Mr. Suzuki’s reveals its chronic inability to see what is “cool” about itself.

This stands in stark contrast to Venezuela’s publicly funded music education program El Sistema. That method also celebrates the idea that music can change the lives of children from diverse backgrounds. The parallel is not surprising since Takeshi Kobayashi brought the Suzuki Method to Venezuela in the late 1970s, teaching a group of underprivileged children to play in an orchestra. But unlike the Japanese government, the Venezuelan government has consistently funded this cultural endeavor since the mid-1970s.

The El Sistema movement is even making inroads in Japan. The Soma Children’s Orchestra and Chorus was established after the 2011 earthquake and tsunami ravaged the northeastern part of Japan, to encourage children there to make music communally. Now Japanese are taking up El Sistema: They recognize the merits of the method because it is dressed in exotic garb, unaware that it has long been in their midst.