Media
In theater and film, we demand that Asian roles be played by Asian actors. Why is opera different?
December 27th, 2017
Tags: opera 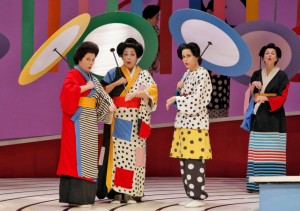 Colorblind casting is essential to opera’s future. Still, in this day and age, it can be startling to see Caucasian singers made up to look Japanese, even in the artist Jun Kaneko’s striking “Madame Butterfly” production (seen here at the San Francisco Opera last year, but coming to the Washington National Opera in May). (Cory Weaver)

Here we go again: Beginning on Saturday, the Washington National Opera is staging Puccini’s beloved and oft-performed “Madame Butterfly,” the story of a Japanese woman betrayed by her American husband. The production, originally created in 2006, is designed by a Japanese artist, Jun Kaneko, last seen in Washington with his opulent “The Magic Flute.” But of the four sopranos appearing in the lead role on different nights, two are Korean (including the promising soprano Sae-Kyung Rim, in her U.S. debut), one is Latina and one Albanian — Ermonela Jaho, who will sing the part opening night. And on the company’s Facebook page, the debate has started about the inappropriateness of non-Asian singers portraying a Japanese heroine.

Two years ago, it was Verdi’s “Otello” at the Metropolitan Opera — the company’s decision not to put dark makeup on the Caucasian tenor singing the main role opened up a discussion about blackface and cultural appropriation in opera. Such discussions are happening with more frequency, in part because the culture is slowly waking up to the subtle ways that systemic racism plays out. At the same time the “Otello” debate was happening, the New York Gilbert and Sullivan Players canceled an upcoming production of “The Mikado” over concerns about how the mainly white cast was going to present the work’s broad Japanese stereotypes. (This is a long-standing problem with “The Mikado,” which spoofs British society through a faux-Japanese lens.) Full story.