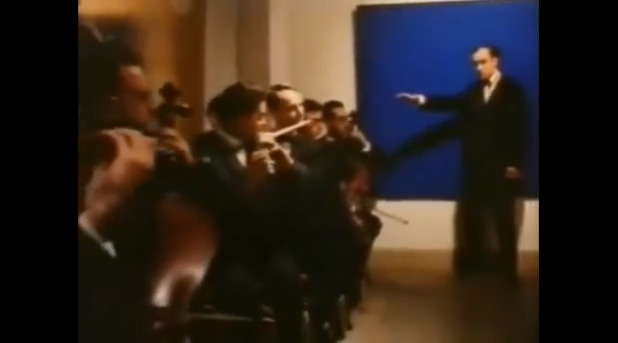 A sellout crowd this week flocked to a New York concert hall to hear an orchestra play a single chord for 20 minutes, then sit in dead silence for a further 20 minutes.


The bizarre symphony, called Monotone, is the work of French artist Yves Klein, who died in 1962 aged 34 . The audience broke into wild applause at the end of the 20-minute silence.

“I would love to have been there, I think the experience of being in the room with it would have been fantastic,” says Stephen Adams, Australian Music Curator at ABC’s Classic FM. “I think it would be an extraordinary experience but that particular piece is sort of unbroadcastable because silence just shuts down the transmitter and you go to back-up programs!”

The original 1960 performance also featured three naked models covering themselves in blue paint and rolling around on a large piece of paper, something that wasn’t recreated in the New York premiere.

Monotone is only one of a long list of music at the wackier end of the classical spectrum. Perhaps the most (in)famous is American composer John Cage’s 4’33” (Four Minutes Thirty Three).

Written for any instrument, Cage’s instruction is for the performer to come on stage and not play for four minutes and thirty-three seconds. Then leave.

Bizarrely, there have been several recordings made of the work, notably by Frank Zappa.

In 2010 there was an unsuccessful Facebook campaign in the UK to push the silent track to the top of the Christmas charts and Classic FM has even broadcast a techno remix version of 4’33” by satirical band New Waver.

Then there are works that demand great endurance from both audience and players, such as American composer Morton Feldman’s string quartet, which lasts for six, unbroken hours.

Described as “a constantly shifting tableau of gorgeous and at times whisper quiet sounds”, it was recently broadcast overnight by Classic FM.

“We did have three complaints,” says Adams. “But there was a lot of positive Facebook activity around it. People were talking about the experience and how the music changed over time.”

And if six hours is just not enough for you, you might turn to the monumental work of American avant-gardist La Monte Young, one of whose performances at his New York Gallery lasted for six years. Another notorious Young piece instructs the performer to build a fire.

But the undisputed prize for the wackiest ever piece of classical music has to go to Young’s Piano Piece For David Tudor #1.

In the piece, the performer brings a bucket of water and a bale of hay on to the stage for the piano to eat.

“The performer may then feed the piano or leave it to eat by itself,” instructs the composer.