Media
THE VIOLIN A Social History of the World’s Most Versatile Instrument
May 15th, 2013
Tags: presentations 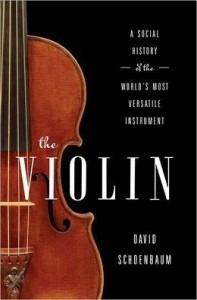 (W. W. Norton) - ’The Violin: A Social History of the World's Most Versatile Instrument’ by David Schoenbaum

And now historian David Schoenbaum, best known for books such as “Hitler’s Social Revolution” and “The United States and the State of Israel,” has ventured forth with “The Violin,” which is informed, he says, by his status as a “lifelong amateur violinist.” It’s a terrific read — one of those rare epical surveys that can be read in a single long stretch or picked up and savored, chapter by chapter.

“The Violin” examines its subject from a wide variety of perspectives, from its first known appearance in the early 16th century (“By a happy coincidence, the origins of the violin coincide with the introduction of printing,” Schoenbaum observes) through the legendary early Italian instruments crafted by Amati, Guarneri and Stradivari, on to the early 21st century, where “an estimated 50 to 80 percent of the student violins on the market were Chinese instruments of respectable quality and affordable price.”

Ah, yes — price. It is no secret that the greatest of the early violins have proved one of the supreme investments of all time, better than California or New York real estate, if not quite on the level of start-up shares in Microsoft or Apple. Schoenbaum charts this market — which began after World War II and has gone ever higher, even through recession years — with the skills of a top financial reporter.

Nothing associated with the violin seems beyond the author’s interest. His topics include the development of the modern bow; differing schools of instruction; the creation (and, too often, early ruination) of prodigies. He takes us through poems, plays and novels in which the violin has a central role, including “The Kreutzer Sonata,” Leo Tolstoy’s bizarre attack on supposed seductive qualities in music, which Schoenbaum rightly calls “among the most famous rants in world literature.” We are given the plot of Jascha Heifetz’s first film, “They Shall Have Music” (1939), in which a first hearing of the violinist in concert at Carnegie Hall turns a juvenile delinquent into a budding fiddler, as suddenly and wholeheartedly as though he’d been struck on the road to Damascus.

There are anecdotes about violinists ranging from superstars such as Itzhak Perlman and Midori to occasional practitioners such as Minister Louis Farrakhan of the Nation of Islam, who played a mostly private recital in North Carolina but did not neglect to invite the New York Times. (“Mr Farrakhan’s sound is that of the authentic player,” a critic reported.) The frustrations of generations of Soviet musicians are encapsulated in the career of David Oistrakh, who was trotted out again and again by his handlers over the years, always accompanied by spies. “Whatever its faults, I owe this regime my life,” he declared. On his first tour of the United States, he played 39 concerts in less than two months. When his colleague Isaac Stern asked him about the hectic schedule, Oistrakh’s answer was revealing. “If I stopped playing, I’d start thinking,” he said, “and if I start thinking, I’ll die.”

Schoenbaum deftly melds history, criticism, legend and occasional snatches of good gossip into a book that will be necessary reading for anybody who plays (or tries to play) the violin, and it ought to appeal to anybody simply in search of some engrossing and exhaustive nonfiction.