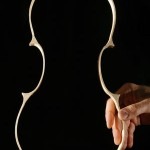 Florian Leonhard, a London violin dealer, keeps a large fossilised ammonite in his showroom. It echoes the scroll on a fiddle’s neck, but it also has symbolic significance: violin-making, he says, is a “fossil profession”. He has a point.

The first surviving violin was made in Cremona, Italy, by Andrea Amati in 1564. A modern musician could pick it up and play it. Apart from a few minor modifications introduced since, the basic design remains much the same today, and so does the way a high-quality instrument is made: by hand, slowly and with loving care.

Every violin has the same complex outline, bulging at the top and bottom and waisted in the middle to give the player’s bow easier access to the four strings. It is the perfect shape for producing a brilliant, expressive and infinitely variable sound in the same frequency range as the human voice. There is also something glamorous and feminine about it. Man Ray captured that quality in an iconic photograph of a beautiful nude woman from the back, with two f-holes painted close to her waist.

The violin’s body is a sound box made from wood, the thinner the better: spruce for the front, maple for the back, the neck and the ribs. The bridge is also made from maple, and the fingerboard and the pegs for the strings usually from ebony. Luthiers are obsessive about their wood and often accumulate huge stashes of it. It needs to be well seasoned and evenly patterned. The best maple produces a superb stripe effect. But most important of all, the wood has to make the right sound. Nicolo Paganini, the most famous violinist ever, once said that Stradivari, the most famous violin-maker, “used only the wood of trees in which nightingales sang”.

Vibrations from the four strings are transmitted via the bridge to the front of the violin, and on to the back via the sound-post, a length of round wood wedged between front and back inside the box. The sound emerges from the f-holes, a pair of elegantly curled slits either side of the bridge. A narrow treble strip of wood called purfling is inlaid into the top and bottom along the edges where they meet the ribs to protect the violin from knocks. In all, it consists of more than 70 parts.

Once built, it is covered in many layers of varnish, in a colour palette ranging from yellow through all shades of brown to a deep, vibrant red. This enhances not only the instrument’s looks but its sound as well. Varnish is the stuff of legends. Many violin-makers make their own and guard the recipe jealously.

There were many earlier string instruments but they sounded quite different. The violin seems to have been born more or less perfect. The backs and fronts of the earliest ones were slightly arched, which gave them a sweet, intimate sound. As halls and audiences grew, the instruments needed to be louder. In his “golden age” of violin-making, between 1700 and 1720, Stradivari developed a flatter design that helped to project the sound. Almost all old violins have since been modified to give them a longer neck and fingerboard and set the neck at an angle, making them easier to play.

Scientists have rigorously analysed old instruments, revealing far more about their physical properties than their makers ever knew. Dendrochronology establishes the age and provenance of the wood; three-dimensional X-rays show up exactly how thick and dense it is, millimetre by millimetre; and spectrometers reveal the composition of the varnish. An instrument made by an old master can now be copied in every detail — except for the sound. After 450 years, the violin-makers of Cremona are keeping their biggest secret.