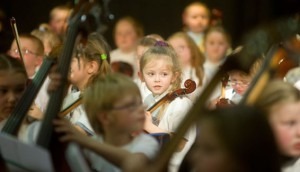 Ten-year old Amileigh Jones plays cello in Big Noise, a children’s orchestra in Scotland. Like all the other members of her orchestra, she lives in Raploch, a suburb of Stirling with a long history of deprivation. On Saturday, at a televised concert celebrating the countdown to the London 2012 Olympics, Amileigh and fellow members of Big Noise will play Beethoven alongside star violinist Nicola Benedetti and the BBC Scottish Symphony Orchestra.

Not so unusual, you might say. Children all over the world show musical talent and perform in public. The difference in Amileigh’s case is that, like hundreds of other children in Raploch, she has not had to pay for music tuition or audition for a place in Big Noise. Every child in the community gets the same chance.

Amileigh is a product of Sistema Scotland, an offshoot of the Venezuelan music education scheme known as El Sistema (The System). Pioneered in the 1970s by a visionary economist and musician, José Antonio Abreu, El Sistema found its ultimate expression in the Simón Bolivar Youth Orchestra, which has taken many of the world’s musical capitals by storm.

In recognition of the strides the Scottish programme has made since it began in 2008, the Venezuelan orchestra and its conductor Gustavo Dudamel are to visit Raploch in June for an open-air concert that will raise the curtain on the London 2012 Festival, the cultural jamboree tied to the Olympics. They will also give two concerts in London.

Abreu’s original goal was modest. In the mid-1970s there were few, if any, opportunities for young Venezuelans to train in an orchestra. He wanted to rectify that. When the orchestra he had founded won a prize at an international festival in Aberdeen in 1977, the Venezuelan government became interested and began to fund his music education programme. In the intervening 35 years more than 1m children have benefited.

El Sistema is the inverse of the western classical music model. In Europe and North America children develop their expertise with an instrument on their own, and only then do they get together with other musicians. With El Sistema, children start by learning to play together.

As El Sistema expanded, so did its social aims. Abreu’s unwritten credo was that being disadvantaged economically did not mean a child had to be disadvantaged spiritually. In his eyes, the opportunity to make music together was a birthright. The discipline and self-confidence it instilled in young people made them better citizens.

“That’s why the focus tends to be on underprivileged children,” says Marshall Marcus, a violinist who taught in Venezuela in the late 1970s and now heads a research project for an international Sistema Centre at London’s Southbank Centre. “This is the part of El Sistema that carries [to other cultures]. It’s a matter of taking away impediments to opportunity.”

There has been no shortage of such impediments in the UK since the 1980s, when Margaret Thatcher’s spending cuts dismantled much of the country’s music education framework. Various privately funded initiatives have tried to make good the loss, but none has offered a Sistema-like model for expansion, which Simon Rattle, a huge fan, has dubbed a “kindly virus”. Sistema-like schemes are now flourishing in Liverpool, Norwich and the London Borough of Lambeth.

Sistema Scotland was first off the mark in 2008 – thanks to the initiative of Richard Holloway, a former chair of the Scottish Arts Council who had visited Venezuela. Before Big Noise arrived, only one child in Raploch was receiving music lessons. The programme now embraces 80 per cent of local children – about 450, including those with learning disabilities.

Based in a new education centre with nursery, primary and faith schools under one roof, it starts with Baby Noise – singing-in-a-circle sessions for mothers and toddlers. When children reach school age, they are given instruments made of card and paper, to help them get acquainted with the feel of a violin. Big Noise provides after-school group tuition three days a week for children up to the age of 12, supervised by 16 teachers – some of them professional orchestral players. The drop-out rate is low and the hope is that when Amileigh and her peers reach their mid-to-late teens they will be mentoring the next intake.

Most of the £3.8m funding for Sistema Scotland has come from private and charitable sources but an independent report, published last year, has transformed the political climate. It said Big Noise had raised self-esteem in children at Raploch, and lifted the community’s hopes for the future. It found “improved social skills, team-working skills and expanded social networks”.

With that endorsement, Stirling Council recently agreed to take over much of the £600,000 annual cost. Community leaders in Aberdeen, Dundee, Fife and Govanhill, Glasgow, are now campaigning for similar schemes.

Not every element of the Venezuelan model can be transposed to the UK. Dudamel and the Bolivars have a natural joy and exuberance that cannot be taught. But Amileigh and other members of Big Noise “love being able to play well and to impress people”, says George Anderson of Sistema Scotland. They may not yet have the prowess of the Bolivars, but if funding can be found to replicate the Raploch pilot scheme, El Sistema’s “kindly virus” could quickly spread across the country.