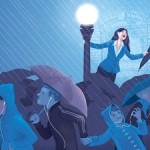 I have been watching, in amazement, the cartoon Wonder Pets on the Nickelodeon children’s television channel. Demonstrating the benefits of teamwork, Linny the guinea pig, Tuck the turtle, and Ming-Ming the duckling (Ming-Ming is everyone’s favorite, and mine, too) save an animal in trouble—sometimes a dolphin, sometimes a monkey, sometimes a bee—in every episode, and feats of great collaboration are always required.


But it’s not just the photo-puppetry animation, the message of teamwork, or the humor of the cartoon that’s engaging; it’s also the fact that the characters are always singing. It’s practically an opera for toddlers, but with a lot more recitative and not too many grand arias.

As the three creatures sing, answer distress calls by phone, and travel far away and sometimes through time, they are accompanied by a score written by current composers and played by an orchestra. The score climaxes every now and then in the Wonder Pets refrain: “What’s gonna work? Teamwork! What’s gonna work? Teamwork!” It’s an awesome achievement to set an entire cartoon series to music and to employ the voices of three young children. Deservedly, Wonder Pets won an Emmy award for music direction and composition in 2008.

Even in our wildest dreams as parents, however, we can’t imagine that Wonder Pets is going to grow an appreciation of singing, never mind opera, in our children. It’s just another passive experience that they sit through. Parents realize this, but we don’t need to worry about it in the toddler years because there is no lack of singing and play in children’s lives at that stage.

Singing is one of the first things that parents do with babies when they are born, and parents are constantly singing to toddlers: wordless ditties, choruses and refrains, made-up rhyming songs, anything to comfort them or engage with them. Parents sing, sing, sing in the early years of children’s lives—and then it stops.

What happens? Once children are at school age, after a toddlerhood of joy in singing, parents begin to consider their musical ability, they look into the future, ambition sets in, music lessons enter stage left, and suddenly, without anyone noticing it, singing has been dealt a critical blow. It is instrumental lessons that children are sent to. Piano, clarinet, fiddle, whatever. Parents suddenly emphasize playing an instrument, as if singing wasn’t substantial enough. Instruments are purchased, music stands are put up, practice is required, and slowly that natural instinct to sing out at the drop of a hat is left behind.

Will singing reappear in the family? Will the songs children learn at school be sung at home? Will their urge to sing, if it is strong enough, find an outlet in a band or a choir when they are teenagers? We don’t know, but by demoting singing when children are so young, we have suggested a trend for life. It is symbolic that the rise of the garage band has occurred as the practice of singing at home has waned. What does it say when the urge to sing or play music means that you end up in the coldest room in the house?

Perhaps singing has been taken for granted. It doesn’t require money, and, unlike instrumental ability, which we generally consider can be learned through practice, we often presume that you either have a voice or you don’t. Our language is full of phrases that inhibit our singing—“she’s tone deaf,” “he doesn’t have a note in his head,” “I never had a voice.” Very few people are actually tone deaf. Being able to sing in tune is little more than a matter of practice.

The lack of emphasis on singing in society means that, well, there is none. Nobody knows the lyrics to anything. Sing-alongs often require a laptop to Google the lyrics. The merry singing after the pub is an endless line of half choruses repeated and then abandoned. At the same time, sing-alongs have become such a rarity that those who have songs, who have learned them, are rarely asked to sing. Society—the bulk of it—has become shy about singing. The spontaneous song becomes the lesser-spotted vocal. Family occasions that cry out for a song—not just weddings and funerals, but also lunches and dinners—are bereft of the practice of calling for hush and asking the one or two in the family who are known to have a voice to release it. Do we know today if any of our nearest or dearest even have a voice?

There is no easy solution to this. Music clearly needs a champion in the home. The sheer variety of aural and visual entertainment available to us presents a formidable challenge. We spend a lot of our time singing and humming along to songs from a digital source. We need to show children that a song is not merely something you consume, but something that you can produce.

Toner Quinn, from the Journal of Music | January, 2010
Weblink: www.utne.com/Arts/The-Songs-We-Dont-Sing.aspx