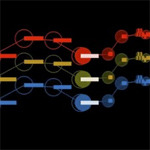 A musical score without any measures or clefs sounds confusing—until you see it.

That’s the idea behind the Music Animation Machine, which sets the work of Bach, Satie, Chopin, and other composers to an animated, Atari-like series of colored bars and dots, to visually explain pitch and timing to those who can’t understand conventional music notation. The result is a sort of meditative “Guitar Hero” experience, with each note lighting up as it’s played across a scrolling screen. MAM’s most recent video, created in June, is Beethoven’s “Great Fugue,” the last movement of his String Quartet No. 13. When the quartet premiered, the audience called for encores only of the middle movements. “And why didn’t they encore the Fugue?” Beethoven reportedly demanded. “That alone should have been repeated! Cattle! Asses!”