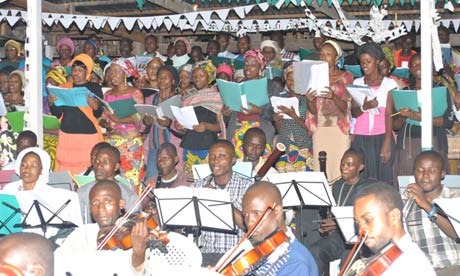 Members of the Orchestre Symphonique Kimbanguiste in rehearsal.
Photograph: OSK

The members of the Orchestre Symphonique Kimbanguiste – the world’s only all-black orchestra – are self-taught and started out playing homemade instruments. Now the band’s founder is to be given a major international accolade

Nathalie is a single mum who struggles to clothe her little boy and pay the rent. She plays the flute and the sax. Josephine gets up at 4.30am every day to sell omelettes at the market. She is in the chorus. Papy is a part-time mechanic who also runs his own pharmacy. He plays the tuba. Josef is a freelance electrician, a kind of African version of the Robert De Niro character in the film Brazil. He also runs his own hair salon and plays the viola.

Nathalie, Josephine, Papy and Josef are adepts of the Congolese art of débrouillardise, a French word that means “making ends meet” or “surviving”. For most of the day, they do whatever they must to hustle their daily bread in the Congolese capital Kinshasa, one of the biggest, noisiest and most dysfunctional cities on earth. In the early evening, they set out on a journey that often takes several hours to rehearse with the Orchestre Symphonique Kimbanguiste de Kinshasa (OSK), the only all-black symphony orchestra in the world. There they find release from their daily cares. “When I sing Beethoven’s ninth Symphony, it takes me far away,” says one of the other singers in the choir.

“They come because they’re passionate about music,” says Armand Diangienda, the man who founded the OSK almost 20 years ago. “It gives them something more in terms of confidence, of feeling capable and of being able to contribute to a collective endeavour.”

If the musicians in the OSK are masters of individual survival, the orchestra itself is an epic example of débrouillardise, of thinking the impossible and then just doing it. Diangienda lost his job as a pilot when the Fokker F-27 he used to fly across the Congo crashed into the hills above the town of Goma in 1992, killing all those on board. Luckily – for him – he was on holiday at the time. Finding himself unemployed, he rallied followers of his father’s church, the hugely popular Kimbanguiste church, and created a symphony orchestra, a strange endeavour for a confirmed reggae fan who had only a passing interest in European classical music at the time.

“We told ourselves that creating a symphony orchestra would be great because the church already had a brass band, a flute orchestra, a guitar ensemble and a number of different choirs,” Armand tells me over the phone from Kinshasa. “I couldn’t read music, but driven by my passion, and with help from my friends, I gradually learned.”

In the early days, instruments had to be borrowed or made from scratch by reverse engineering. Violin strings were concocted from bicycle brake wire. Hundreds of scores were copied out by hand, individual parts had to be deciphered by listening to the works on CD, over and over again. Music stands were cobbled together from old pieces of wood.

Despite attracting huge interest locally, the orchestra remained the city’s secret until two German film-makers, Claus Wischmann and Martin Baer, made the 2010 documentary Kinshasa Symphony, one of the most beautiful and honest portrayals of the power of music and the human spirit that I have seen in ages.

Last year, the orchestra travelled outside Africa for the first time, performing at the TED conference in California, and later in Monaco. CBS devoted an hour’s coverage to them and Peter Gabriel joined them for a gala soiree to raise funds for a music school in Kinshasa.

But that’s not all. Diangienda is now on his way to London to become an honorary member of the Royal Philharmonic Society, an accolade previously granted to the likes of Mendelssohn, Rossini, Wagner, Brahms and Stravinsky. “The day I was told, I had tears in my eyes,” he says.

The fact that many Congolese regard Diangienda as something of a living god has no doubt helped him to achieve the seemingly impossible. His grandfather, Simon Kimbangu, was a healer and preacher whose sermons instilled pride and self-belief in ordinary Congolese people and fear in their Belgian colonial masters. He died in 1951 after spending 30 years in prison. One of his most incendiary statements was: “The black man will become white and the white man will become black.”

For Diangienda, however, performing western classical music on the banks of the Congo river has nothing to do with turning his back on his own African culture. “Everything we’re learning by playing classical music will allow us to enrich our own music as well and immortalise it by writing it down,” he says. Diangienda, and the orchestra’s first violinist Heritier Malumbi and bassoonist Balongi, have already composed several symphonic works full of rich Congolese flavours.

“My grandfather claimed that to sing was to pray twice,” Diangienda says. “Music is already a form of spiritual wealth to us, the Kimbanguistes. But what inspires me even more is that my grandfather’s message was a universal one; a message of peace, of love, of reaching out for others and bringing people together.”

It was also a message about work, perseverance and self-respect. The stirring finale of Kinshasa Symphony sees the orchestra performing Orff’s Carmina Burana on a large piece of wasteground in front of an ecstatic local crowd. The beauty, pride and common purpose that oozes from the performance make mincemeat of the cliches of chaos and hopelessness that burden the Congo. A small but growing group of cognoscenti already know that Kinshasa is one of the most culturally dynamic and creative cities on earth. The OSK only reinforces that conviction.