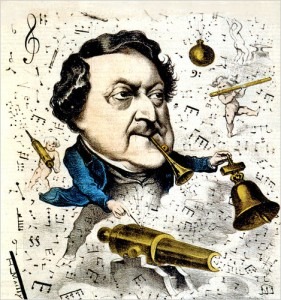 There are lots of theories. Maybe Gioachino Rossini was tired. He might have been devastated by the death of his beloved mother. Or perhaps it was his health, or shifts in art or politics. His detractors insinuated that he had simply grown rich and lazy.

All we know for sure is that he stopped. His 39th and final opera, “Guillaume Tell,” known today almost solely for its overture, will receive rare performances on Saturday and on July 15 at the Caramoor International Music Festival in Katonah, N.Y., in a semi-staged version to be conducted by Will Crutchfield. At the work’s premiere, in 1829, Rossini was 37 and the most celebrated composer in the world, the creator of exuberant comedies like “Il Barbiere di Siviglia” and “La Cenerentola” and sober tragedies like “La Donna del Lago” and “Otello.”

“During the last 12 years,” Stendhal had written in 1824 , “there is no man who has been more frequently the subject of conversation, from Moscow to Naples, from London to Vienna, from Paris to Calcutta, than the subject of these memoirs. His glory already knows no other bounds than those of civilization itself, and yet he is barely 32.”

Then something happened. Rossini lived for nearly 40 years after “Guillaume Tell” but never wrote another opera. His “great renunciation,” as one biographer called it, is a phenomenon without equivalent in music history. Other composers — Elgar, Rachmaninoff, Sibelius, Ives — have retired long before their deaths. But none have been as famous, or as young, as Rossini.

He was born in 1792 in Pesaro, Italy. His father made a little money playing the trumpet and horn, and his mother was an aspiring singer. Rossini showed early talent as a composer, and in 1810, at 18, he had his first hit with the one-act farce “La Cambiale di Matrimonio.” As would be the case with many of his operas, the libretto was stale, but Rossini’s music sparkled.

In early 19th-century Italy a successful new work quickly entered the repertory, and Rossini turned out several each year. “Di Tanti Palpiti” from “Tancredi” (1813) became one of the most popular tunes in Europe, and Rossini became renowned for buoyant works like “L’Italiana in Algeri” (1813) and “Il Turco in Italia” (1814). By the tumultuous premiere of “Il Barbiere di Siviglia” in Rome in 1816, he was the celebrity described by Stendhal.

Inspired by the charismatic Spanish soprano Isabella Colbran, whom he later married, Rossini gradually moved from comic operas to grander, more serious works. His shift in style had its critics; when they met in 1822 Beethoven advised Rossini, “Above all, make more ‘Barbieres.’ ” But his darker operas were tremendously popular, particularly in Paris, where he moved in 1824. In 1829 he secured a contract there for a series of new operas, along with a coveted lifetime pension.

At the premiere of “Guillaume Tell” three months later the audience was merely polite, and Rossini left Paris less than 10 days afterward. It was long thought that his swift departure and, by extension, his retirement, were due to distress at the failure of “Tell.” But that doesn’t make sense. For one thing, the reviews were glowing. A newspaper critic for Le Globe wrote, “From that evening dates a new era, not only for French music but also for dramatic music in all countries.”

Parsing the real reasons why Rossini stopped composing is hard because he was not, to say the least, given to personal revelations. In 1992 the Fondazione Rossini began to publish a new edition of his letters. Four volumes have come out, 2,760 pages in all. But while the Rossini scholar Richard Osborne has called the project absorbing, he added that “it would be wrong to suggest that the volumes radically alter one’s perception of Rossini’s personality or achievement.”

Despite his reserve Rossini sent clear signals of his intentions. “Next April he will be 28,” Stendhal wrote to a friend in 1819, “and he is eager to stop working at 30.” By 1828 a Paris newspaper could confidently write, “Rossini has promised to write a work, ‘Guillaume Tell,’ but he has asserted that he will not go beyond this promise and that this opera will be the last to come from his pen.”

The critic Charles Rosen has suggested that Rossini simply couldn’t get past his mid-30s, “the age when the most fluent composer begins to lose the ease of inspiration he once possessed.” In 1824 Stendhal worried that Rossini “has already written too much; or rather, has written too fast.”

“He has exhausted his powers or anticipated his strength,” he added, “and ought now to remain fallow for a time.”

But there is nothing exhausted or valedictory about “Guillaume Tell.” There is just a sense of vitality, of a composer working at the confident height of his powers. By the spring of 1830, Rossini had even sketched a tantalizing scenario for a new opera based on Goethe’s “Faust.” Requesting the promised libretto from his Paris collaborators, he wrote impatiently, “I cannot work without a poem.”

Then came the July Revolution. The Paris Opera was put under private ownership; budgets tightened, and Rossini’s pension was canceled. It took six years of litigation to resolve the issue in his favor. By that time the city’s operatic tastes were shifting toward Meyerbeer’s epic spectacles, which Rossini dismissed as “the big.” Verdi’s beefy, brassy “Nabucco” and “Ernani” were on the horizon. It was a new era, and not the one Le Globe had proclaimed.

Rossini might have been able to adapt; “La Donna del Lago” (1819) and “Guillaume Tell” point the way toward midcentury operas. But he showed little inclination to re-enter the arena, declining commissions from Vienna; Modena, Italy; and Paris (where he suggested a revival of “La Donna del Lago” instead).

His worsening health did not help. Perhaps in response to the death of his mother, in 1827, Rossini suffered debilitating depressions well into the 1850s. Several writers have suggested that he had what we would now call bipolar disorder, and his psychological troubles were compounded by physical ones. He had long had gonorrhea, which seems to have worsened. In 1855, at his sickest, he fled Italy for a cure in France.

Coincidentally or not, he regained his health in Paris, gradually becoming the jovial old gourmand — tournedos Rossini! — we imagine when we think of his late years. He hosted Saturday evening musical gatherings that attracted the likes of Liszt, Saint-Saëns and Verdi. By 1857 he was even composing again: the “Petite Messe Solennelle,” both serene and unsettled, and volumes of stylish songs and chamber pieces now known collectively by Rossini’s winking name for some of them, “Péchés de Vieillesse” (“Sins of Old Age”). He died in 1868.

The few times Rossini spoke about his retirement, he was straightforward. He and his work were less welcome in Paris in the 1830s. He wanted to be in Italy with his aging, widowed father. He was sick and tired. He was disturbed by changes in singers and singing, and by the political turmoil sweeping Europe.

They are all right answers. Rossini’s “great renunciation” has a wealth of reasonable explanations. But if the story makes sense in its entirety, it remains unsatisfying. It seems impossible that a genius like Rossini would be able to give up his career so easily, without the need to keep producing and innovating.

And the question remains: Why wasn’t he more upset about it? He seems to have been satisfied with composing and without. That is what continues to fascinate us — even, on some level, offend us — about Rossini: his excuses may have been reasonable, but his serenity was not.

It’s the same problem we have with the poet Arthur Rimbaud, who in 1875, after a brief, dazzling career, abruptly abandoned poetry at 20 and spent the last 16 years of his life as a merchant in Africa. We pore over his final work, “Illuminations” (recently published in a new translation by John Ashbery) , as we do over “Guillaume Tell,” looking for clues that aren’t there.

Still living in a Romantic era, we expect our artists to be rebels on whom we can project our longings for freedom without abandoning the safety of conformity. In return we cultivate a vague, almost occult image of artists and artistic production, characterized by long, moody walks and tormented bursts of inspiration. Artists don’t work, not in the usual sense of the word. They channel.

The revelation of “Picasso: Guitars 1912-14,” an exhibition this spring at the Museum of Modern Art, was that even a genius is a worker. During that crucial period, almost every day for Picasso was a day in the studio, diligently tackling problems, trying out different options. This was Rossini’s practice too.

The idea of art making as a craft, even a job — something you do conscientiously and professionally; something it is possible to give up willingly — is foreign to our modern sensibilities. But our sense of artists as separate from the everyday world, engaged in some kind of obscure magic, has made it easier for us to ignore them and believe that their work is irrelevant to our own, comparatively ordinary lives. It also relieves us from having to think too hard about something that mattered a great deal to the shrewd Rossini: compensating artists fairly for their work.

Rossini existed right on the cusp of our era. But though his works point toward Romanticism, at heart he remained a man of the 18th century. Wagner, just 21 years younger, wrote his own librettos and waited for decades to complete an opera, even building his own theater, so that the performances would be precisely as he envisioned them.

That would have been absurd to Rossini. He wrote for use — specific houses, specific singers — and compromised when necessary. He was a great artist, but he didn’t write for himself or for posterity, not in the way we imagine doing so today. He wrote an opera for Naples so that it would be performed in Naples. After he died, music would go on without him.

When Wagner visited Rossini in Paris in 1860, he wanted above all, according to a friend, to observe “at close range” a composer who was able “to separate himself from his genius as one removes a heavy burden,” “without worrying more about his art than if he had never practiced it.”

The subject came up in due course. Rossini said he’d been exhausted in the late 1820s, and when he returned to Italy to rest, he found the quality of singing and audiences had declined. “There you have the reasons,” he said, “and there were also others, why I judged that I had something better to do, which was to keep silent.”

Wagner was impressed by the man but remained unconvinced, mulling afterward what Rossini could have produced had he “felt within himself the religion of his art.” One hundred fifty years later, it is a wonder we still share as we think of “Faust” and the other operas Rossini might have composed had he thought of his art as a religion, had he not been himself.

“For my part,” he told Wagner, “I belonged to my time”: an admission proved as much by the astonishing end of his career as by his astonishing music.