Media
The Power of Music, Tapped in a Cubicle
February 20th, 2013
Tags: society 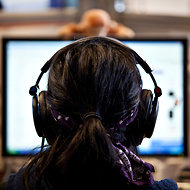 Workers shared some of their favorite tunes to listen to while on the job. (YouTube.com)

THE guy in the next cubicle is yammering away on the phone. Across the room, someone begins cursing loudly at a jammed copy machine.

The headphones on the other end of your desk suddenly look very appealing. Would anyone mind if you tapped into your iTunes playlist for a while?

Some workers like to listen to music when they find themselves losing focus. They may also plug in their earbuds to escape an environment that’s too noisy — or too quiet — or to make a repetitive job feel more lively.

In biological terms, melodious sounds help encourage the release of dopamine in the reward area of the brain, as would eating a delicacy, looking at something appealing or smelling a pleasant aroma, said Dr. Amit Sood, a physician of integrative medicine with the Mayo Clinic.

People’s minds tend to wander, “and we know that a wandering mind is unhappy,” Dr. Sood said. “Most of that time, we are focusing on the imperfections of life.” Music can bring us back to the present moment.

“It breaks you out of just thinking one way,” said Teresa Lesiuk, an assistant professor in the music therapy program at the University of Miami.

Dr. Lesiuk’s research focuses on how music affects workplace performance. In one study involving information technology specialists, she found that those who listened to music completed their tasks more quickly and came up with better ideas than those who didn’t, because the music improved their mood.

“When you’re stressed, you might make a decision more hastily; you have a very narrow focus of attention,” she said. “When you’re in a positive mood, you’re able to take in more options.”

Dr. Lesiuk found that personal choice in music was very important. She allowed participants in her study to select whatever music they liked and to listen as long as they wanted. Those who were moderately skilled at their jobs benefited the most, while experts saw little or no effect. And some novices regarded the music as distracting.

Dr. Lesiuk has also found that the older people are, the less time they spend listening to music at work.

Few companies have policies about music listening, said Paul Flaharty, a regional vice president at Robert Half Technology, the staffing agency. But it is still a good idea to check with your manager, even if you see others wearing headphones in the office.

He said some supervisors might think that workers wearing headphones weren’t fully engaged and were blocking out important interactions “because they are going into their own world.”

“If someone’s not doing a good job,” he said, “then you can have a hiring manager say that all they do is listen to music all day and that it’s hampering productivity.”

For those who choose to listen to music, it’s best to set limits, because wearing headphones for an entire shift can be perceived as rude by those nearby.

Dr. Sood, at the Mayo Clinic, said it takes just 15 minutes to a half-hour of listening time to regain concentration. Music without lyrics usually works best, he said.

Daniel Rubin, a columnist at The Philadelphia Inquirer, said he has listened to jazz and piano concertos for most of his 33-year newspaper career — but only when writing on deadline. He started off using a Sony Walkman, but now makes use of 76 days’ worth of music on his iTunes playlist.

“The person clicking their nails three desks away and the person humming next to me all sound equally loud and it’s hard for me to block them out,” he said.

As a columnist, he works mostly alone, and people in the office seldom need to approach him. But when he was a budding reporter, he noticed that colleagues would become irritated when trying to get his attention. “It was really annoying because suddenly you would hear ‘Dan … DAN … DAN RUBIN! People were screaming at you because they needed you.”

ANDREW ENDERS, 28, a lawyer and insurance broker in Linglestown, Pa., said he and an officemate bonded over a local radio station when they worked at the Dauphin County District Attorney’s office. They switched off the radio only when speaking with a client, and they lowered the volume when their boss was around.

“I do these very serious things, reviewing insurance policies and evaluating risk and liability exposure,” Mr. Enders said. “A big part of my personality is the artistic side, and music helps me balance who I am as an individual with what I’m doing at work.”