Media
The Perceived Delicacy of the Female Conductor
May 16th, 2012
Tags: conductors 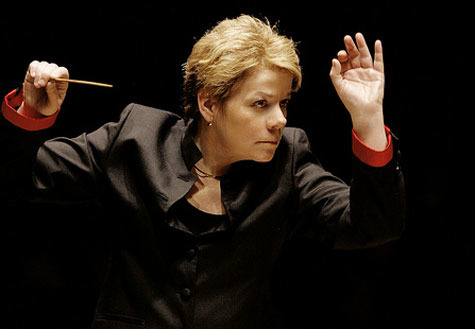 Researchers provide evidence that gender stereotypes shape our reaction to orchestral performances. But they report these effects aren’t consistent, and for female conductors, such as Marin Alsop, they aren’t necessarily negative.
(Grant Leighton/Southbank Centre London)

Many factors influence the way classical music fans respond to a recording. The expressiveness of the composer. The virtuosity of the musicians. And, it seems, the sex of the conductor.

Researchers Valerie Folkes of the University of Southern California Marshall School of Business and Shashi Matta of The Ohio State University provide evidence that gender stereotypes shape our reaction to orchestral performances. But they report these effects aren’t consistent, and for female conductors, they aren’t necessarily negative.

“People have strong beliefs about how men and women differ, which can influence their judgments about the kinds of product that a source will create,” they write in the Journal of Consumer Psychology. In three experiments, they set out to discover whether listeners would judge a particular performance differently if they believed a man or woman was at the podium.

The first experiment featured 413 undergraduates — business majors who, for the most part, had no strong interest in classical music. They first read a short news story describing the appointment of a new music director of the Baltimore Symphony. Half read an accurate account referring to the female conductor Marin Alsop; the others read a doctored report referring to the male conductor Maron Alsop.

Half the members of each of group read unambiguously positive reports about the conductor. The others read about mixed reactions to the announcement, including dissent among members of the orchestra who were disappointed by the pick.

However, those who read the universally positive report reacted quite differently. They gave the performance equally high marks for such masculine qualities as “stirring” and “compelling,” regardless of whether they thought the conductor was male or female.

“Participants appear to have made inferences about her superior competence that led to beliefs about her product’s likely superior quality,” the researchers write. In other words, if someone can successfully defy gender stereotypes and earn that much acclaim, we figure she must be amazing, and judge her work accordingly.

This experiment, and a second in which students listened to an Alsop recording of a Brahms overture that featured more “feminine”-sounding passages, were repeated using a group of 112 classical music enthusiasts. The results followed the same pattern.

“They believed that a female conductor is more competent than a male conductor when both were highly praised,” the researchers write. But once again, “her” performance of Brahms was judged more highly on feminine attributes such as delicacy, and “his” received higher marks on such masculine elements as power.

So what did the professional critics think of the recording? A quick survey of major CD-review websites finds one called Alsop’s Brahms First Symphony “lyrical and passionate rather than stoic or grand,” while another used the phrase “nice, light, airy, and lyrical.” Hmmm. On the other hand, a third reviewer called her interpretation “grand and imposing … with genuine thrust and energy.” No gender stereotyping there.

Perhaps the most interesting component of the study was a manipulation given to certain participants in the first two experiments (the ones featuring the undergraduates). Some were given a nine-digit number to remember; others were instructed to listen to the music very carefully, “remembering as much as you can.”

The distracting task and the close listening had the same effect: Greatly dampening the likelihood of lapsing into stereotypical thinking. Intense focus on the string of numbers, or on the performance itself, monopolized the participants “cognitive resources,” the researchers write.

Too preoccupied to pigeonhole people, they simply responded to the music.