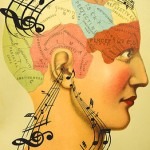 Here we go again: A paper published by two researchers at the University of London claims to prove that music affects our responses to visual images.

In “Crossmodal Transfer of Emotion by Music,” Joydeep Bhattacharya and Nidhya Logeswaran report that people who look at a picture of a human face can be influenced in how they evaluate the emotion shown by that face if they listen to a 15-second snippet of music before viewing it. If the music is “happy,” then the subject is more likely to judge the facial expression shown in the picture as happy—even if the expression is neutral—and vice versa.

Forgive me for rolling my eyes, but I’ve been down this road a few million times, and I still don’t know where it leads. Only the tone-deaf doubt the power of music, though some feel it more strongly than others. Kingsley Amis actually went so far as to claim that “only a world without love strikes me as instantly and decisively more terrible than one without music.” Catch me on the right day and I might well go along with Amis—but why? What is it about music that is capable of swaying human emotions?

To answer that question, you have to start by asking another one: What does music mean? We know what a pop song or an opera aria means because the words tell us—but how do we know what a symphony means? Instrumental music is nonverbal and thus radically ambiguous. It doesn’t lend itself to what might be called content-oriented analysis, though plenty of intellectuals have tried to analyze it in precisely that way. The philosopher Susanne Langer, for instance, defined music as “a tonal analogue of emotive life.” Yeah, well, OK, but what does that mean?

The trouble with Langer’s “definition” is that it’s circular. If you read the first paragraph of this column closely, you may have noticed what logicians call a planted axiom: the authors of “Crossmodal Transfer of Emotion by Music” take it for granted that some music is “happy” and some music “sad.” So do I, and so do you. But how do we know that in the first place? Is the “sadness” of a slow piece of music in D minor somehow intrinsic to its tempo and key? Or has the human race simply learned over time to associate certain musical devices with certain emotions?

Many musicians regard such associations as simplistic, even specious. Igor Stravinsky went so far as to claim that “music is suprapersonal and superreal and as such beyond verbal meanings and verbal descriptions.” Felix Mendelssohn, writing a century earlier, put it more poetically: “The thoughts which are expressed to me by music that I love are not too indefinite to be put into words, but on the contrary, too definite.” And how definite? Donald Francis Tovey, the great British musicologist, once told a friend that “I have (this sounds like fantastic nonsense, but it isn’t) frequently caught myself positively solving some problem (of a more or less philosophical nature) in, say, the key of A minor, where I had utterly failed to reason it out in words.”

While such “solutions” are not given to lesser mortals, it is possible for trained musicians to talk in fairly specific terms about what makes a piece of music beautiful—to them. I know what it is that I like about, say, Gabriel Fauré’s bass lines, or the harmonies in the songs of Jimmy Van Heusen. Alas, I can’t tell you why these things tickle my fancy. I can only apply Eddie Condon’s empirical test of musical quality: “As it enters the ear, does it come in like broken glass or does it come in like honey?” And Condon’s Law is as circular as Langer’s definition of music: It sounds terrific, but in the end it gets you nowhere.

Enter the guys in the white coats, and it turns out that they don’t agree, either. Daniel J. Levitin, a rock musician and record producer turned neuroscientist, has argued in “This Is Your Brain on Music: The Science of a Human Obsession” (Dutton) that current research into the psychology of musical perception and cognition proves that the human brain is biologically hardwired to find meaning in music. But many evolutionary psychologists believe no less firmly that music is nothing more than a fundamentally meaningless form of what Steven Pinker, writing in “How the Mind Works” (Norton) calls “auditory cheesecake.”

It won’t surprise me if neuroscientists eventually succeed in unlocking the mystery of music. I don’t fear that prospect, but I do have a sneaking suspicion that part of the charm of music lies in the fact that we don’t know what it means, any more than we can explain the equally mysterious charm of a plotless ballet by George Balanchine or an abstract painting by Piet Mondrian. “We dare to go into the world where there are no names for anything,” Balanchine once said to Jerome Robbins. Most of us, on the other hand, live in a prosy, commonsense world where everything has a name and most things have an explanation. That’s why it is so refreshing to enter into the presence of great art, and why the greatest works of art always contain an element of ambiguity. A masterpiece doesn’t push you around. It lets you make up your own mind about what it means—and change it as often as you like.