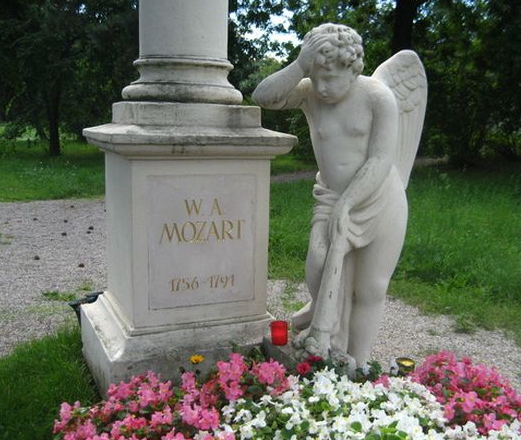 Was the wonder of Salzburg really buried in a mass grave?

Immortalised in director Miloš Forman’s iconic film Amadeus, the legend of Mozart’s pauper burial – in which he was purportedly sewn into a linen bag and tossed into a mass grave – has long fascinated historians and musicians alike. But online blogger Michael Lorenz argues this myth may actually be just that – a myth, and one that may have simply originated from some lazy research by music historians.

Austrian ruler Joseph II played an important part in the creation of the mystery surrounding the great composer’s burial. In 1784, Emperor Joseph – a man obsessed with sanitation and apparently not too keen on the smell of death – issued the Josephinian Burial Regulations decree that sought to achieve the “quickest possible decomposition” of buried bodies. He proposed bodies “should be sewn into a linen bag, completely naked and without clothes”, placed in one mass grave and that coffins were to be made reusable, as only necessary for transporting bodies to the burial site.

Lorenz argues that music historians such as Braunbehrens, Maynard Solomon and Martin Geck got it all wrong by ceasing their investigation at this point, and of incorrectly perpetuating this singular proposition of Emperor Joseph’s as what actually occurred. Indeed, at the time, the passing of such a decree required the full support of the Vienna City Council, and many board members apparently felt that the changes outlined were too reminiscent of the mass graves required during the 1713-14 plague epidemic. Fierce public outrage ensued and the the motion was quickly rejected. In response, Joseph II issued another decree acknowledging that “many minds have been troubled” by the proposed regulations, and instead allowed “everybody to freely do what in advance he considers agreeable for his body”.

So how does Mozart fit into the picture?

Although no documents detailing the purchase of Mozart’s coffin survive, Lorenz highlights some interesting evidence that allows us to guess at the circumstances of Mozart’s burial, and how much the costs of a private funeral added up to in 18th century Vienna.

Ultimately, despite popular opinion, it seems that Mozart was not in fact buried in a linen bag without a coffin and dumped unceremoniously into a mass grave, but was instead buried in a customary “allgemeines Grab” (the usual common grave) after the debts he had incurred in life left his widow Constanze without enough money for a private funeral.

It just goes to show that even in death, Mozart – the man and his music – continues to be a source of fascinating deliberation for many.