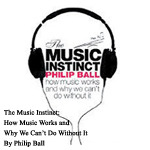 Music takes many forms. It can soothe, rouse, prompt deep introspection, manifest itself as football fans chanting about the referee’s parentage, and so on. One person’s music is someone else’s appalling racket. Aristotle lauded its morally ennobling qualities; the CIA have used it as torture.


How can something so elusive be tied down in words? But music doesn’t exist in some celestial realm of its own. Rather it is a human creation, “the most remarkable blend of art and science, logic and emotion, physics and psychology, known to us”, as Philip Ball writes in this fascinating book.

A consultant editor for the science journal Nature, Ball is the author of a range of popular science books and his encyclopaedic scope is evident here. He moves from Bach and Bartók to “Somewhere Over the Rainbow” and Led Zeppelin, and proves as comfortable discussing the science of music as its cultural and artistic dimensions.

Cognitive scientist Steven Pinker argued, in his celebrated book The Language Instinct, that language is biologically innate to humans, wired into our brains by evolution. Music is different: in Pinker’s view it is “auditory cheesecake”, a luxury of life, not essential to it. Here Ball grumbles about the cheesecake metaphor but doesn’t fundamentally dispute the point. Instead he modifies it: music may not have an evolutionary function, but our brains have evolved in such a way as to make us naturally musical.

“We are pattern seekers, clue-solvers, unravellers of sensory data, and also communicators and storytellers. Within the auditory domain, those things are going to make us musical beings, come what may.” Music is “the aural equivalent of fireworks” and “a gymnasium for the mind”, both an extraordinary aesthetic experience and a mental work-out.

Mainly drawing on western traditions, the book takes us painstakingly through the tools of composition and the way “our brains must work some clever magic” to make sense of them. Even if you don’t know your diatonic scales from your bathroom scales, you display a sophisticated degree of musical understanding simply by hearing a series of sounds as music. “Experiencing music is an active affair, no matter how idly we are listening,” says Ball.

Despite Ball’s fluent writing, and the argument that we all in a sense know how to read music, there are times when the book resembles a particularly tricky Schoenberg concerto. Statements such as “Relative to the original C, this new note has a frequency greater by a factor 3/2 x 3/2, or 9/4, and it corresponds to the note D” left me feeling like Spinal Tap’s clueless guitarist Nigel Tufnel. (Ball, musical omnivore, mentions him too.) Yet the effort is handsomely rewarded.

One small cavil: I would have liked more discussion about artificial intelligence and music. Can a machine be programmed to compose? What implications would that have for Ball’s description of music as “a direct route to the core of our shared humanity”? This thought-provoking book answers many questions, and leaves a few hanging tantalisingly behind as well.