Media
The music can speak for itself, but this composer’s words are also valuable
June 1st, 2011
Tags: profile 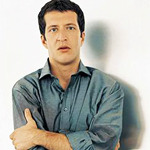 COMPOSING, says Thomas Ades in a friend’s New York loft, is “essentially a weird, physical compulsion you do on your own. You just have to do it. It’s almost pathological. If I didn’t I would become impossible, unmanageable, a gibbering wreck wandering the streets muttering wildly. It’s like getting rid of a nervous twitch. I can’t live in this world unless I’m creating music.”

He prefers his “family” or “children” – his pieces – “speak for themselves”, but today will open up about the state of classical music teaching, why only self-possessed mavericks succeed, his relationship with his partner and collaborator Tal Rosner, and his plans for a new opera, his third, based on a classic Luis Bunuel film. We meet the day after the New York premiere of Ades’s piano concerto, In Seven Days, which Ades performed himself, with a video by Rosner and accompanied by a “hell for leather” New York Philharmonic. (Ades performed the same work with the Melbourne Symphony Orchestra last year.) On the same night it was announced that his second opera, an adaptation of The Tempest, would play at the Metropolitan Opera, his debut there.

After we meet he staged (with a video by Rosner) his piece Polaris for the opening of Frank Gehry’s much-hailed New World Centre in Miami. “The whole thing was dazzling,” he later says via email. “The hall has more technology, video and capabilities than probably all the classical concert halls in the world put together.”

“Being a composer comes first,” he continues. “I’m not confident with being a public figure, why anyone would care what I said about anything. I have to look after my family – my pieces – and I do it in isolation. If I was going around being all public, my pieces would go ‘Daaaad.’ I would embarrass them and myself. I don’t matter, they do.”

Of course, he has “opinions, political views and flawed thoughts, but I’m not someone who can express it in words. I’m not a great writer or painter. I may not be great anything, but I say what I want to say in music.”

Classical music, he says, takes a while to find its place in history, and he doesn’t want to feel trapped by his past.

Ades grew up in Hampstead, North London, with a linguist and an art historian as parents, the eldest of three boys, all close. How was he as a boy? “Fat,” Ades guffaws. “I would read tortured books and tortured philosophy and feel tortured but not be that tortured. I would probably have been called pretentious because I walked around with copies of Ulysses. I didn’t understand every word, but I had spurts of trying to.

“I sometimes had the sense of having a good brain and sometimes wanted to stare at the sky. When physical activity was mentioned, I became a bit dicky. I loathed rugby and wondered why anyone would put themselves through the cold and mud.”

Ades was thrown out of class for not paying attention and had a “funny relationship with truancy”, but got As for everything. “If I had a child who said they wanted to be a composer, I’d say, ‘It’s not going to work out’, but my parents were brilliant: they let me go for it.”

He attended the junior Guildhall School of Music and Drama, and was “voracious” in creating compositions, inspired by “everything, particularly anything with some whacking in it, anything that could be hit, blown or scraped. I’ve always loved percussion” (evident in his second major piece, Asyla, which was inspired by club music).

Ades knew he was gay from a young age. “It was pretty tough, it can be very distressing if you think you are the only one. You create this scenario where it’s this huge tragic burden. It’s not like talking about a food you don’t like. It’s about sex. I thought I was Tchaikovsky, tortured and in pain, and listened to his music – all that misery and desperation – and thinking it was because he was teased for being gay.

“Now I think he was probably having a riotous time.”

The writer Philip Hensher once described Ades’s charismatic presence at Cambridge (where he achieved a double-starred first in music) as akin to “Mahler on the streets of Vienna”. That elicits another guffaw from Ades.

“I didn’t feel particularly brilliant so I worked extra hard. I talked to an interviewer freely about Mozart, and he thought I was comparing myself to Mozart, which would obviously be mad. That’s when I withdrew. If my personality was going to be an obstacle, there was no point putting myself out there.”

How does he compose? “Bum on the chair, ha-ha-ha. Pencil, paper, write notes down. A lot of the time it might be a scrap of an idea, three or four notes that I put on paper and can’t see what to do with. I pin it to the wall and wait for something to happen. By the end, the wall looks like a beautiful nightmare. Some of it has gone in, some ends up in the bin, some goes into a new piece. It sounds chaotic, but I instinctively know where page 47 is. If I didn’t, the world would come to an end.”

His thirties were a period he calls his “teenage years”: after composing The Tempest, his second opera, in 2003, he “went out and saw the world”. Ades and Rosner met six years ago and had a civil partnership in 2006.

“That’s been great. It’s opened up all sorts of doors: legal protections and, for Tal, citizenship rights.” Has the relationship changed him? “I’m sure it has, but it’s hard to say how. I feel different every day.” He roars. “I’m a Pisces. I know some people are more stable. I’m up-and-downsey. When something works it’s wonderful; when it doesn’t it’s a great big black cloud.”

Ades’s third opera is “finally beginning to form after having copyright issues”, he reveals; he has completed drafts of the libretto and “scraps” of music to his version of Bunuel’s 1962 film The Exterminating Angel, about a party where guests are prevented from leaving by an unseen force.

“By the end they’re throwing themselves at the door. It’s a sort of entropy, and for me stands for that sense of ‘I’ve been meaning to do that for ages’ but never getting around to it.”

The film unpeels the perverse mystery that has kept them trapped. Ades jokes that “we’ve all been to parties like that”, but says the opera’s truth is more profound: “I recognise that door. Writing an opera is like that: you get to a point which you can’t get beyond. You have to get through it.” The opera will premiere at the Salzburg Festival in four years, he hopes, and then have a season at the Royal Opera in London.

Ades is also writing a song cycle for this year’s BBC Proms, deriving from a medieval German text about “how death comes to us and that’s not depressing. I think about mortality all the time.”

His career seems gilded, some say cosseted. “I haven’t had terrible illness or privation, but these pieces don’t get written because I was lucky in my upbringing. They get written because I crack the whip with myself. It’s hard work, sitting down writing. It’s annoying when people say that about me, because it’s like saying it does itself and it doesn’t. I wish it did.”

Is classical music being taught properly to children? Ades demurs to answer, then says, abruptly: “I’d be very surprised if it was. Classical music is seen as luxury and elitist and that’s stupid: everyone loses. There should be more of it in schools. It would be nice to get rid of that fear of it being difficult. Children are not stupid. They don’t need to be spoon-fed something and told it’s simpler than it is. I sound like an old codger, but I wish everyone could be taught how to write music rather than have a microphone shoved into their hand and told to sing.

“I can’t stand The X Factor because it celebrates people not doing something well being told they are. It’s unfair to tell children they are all equally talented because it’s not true. I got great things from my teachers, but when you’re trying to forge your way you’re saying, ‘No, it should be like this.’ You’re resisting your teachers and risk them thinking you’re an a-hole or an idiot.”

He adds: “The truly talented will do what they do, despite everyone and everything.”

For such a reticent man, that’s some rallying call.

His audiences, Ades says, are “like me. People don’t want to be given what they want. They want to find whole worlds they didn’t know they could want.”

He laughs again, rather soberly this time.