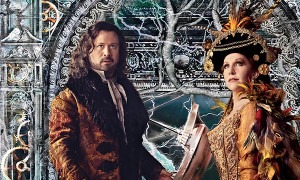 THE Oxford English Dictionary defines a pastiche as “a medley of various ingredients; a hotchpotch, farrago, jumble.” The word is derived from the 13th-century Latin “pasticium,” a savory Mediterranean pie filled with whatever is left over in the kitchen. A modern analogue, pastitsio, can be found at every Greek diner in the land.

“The Enchanted Island,” which receives its premiere at the Metropolitan Opera on New Year’s Eve and runs in repertory through Jan. 30, is called a pastiche. Another creative use of leftovers, it is a Franken-opera formed from the severed limbs of other operas. But these limbs boast high pedigrees, having been created by the likes of Handel and Vivaldi. And they are animated by Phelim McDermott and Julian Crouch, the team that produced both the Met’s much-admired “Satyagraha” and the Broadway crowd pleaser “The Addams Family,” and will be sung by stars including Joyce DiDonato, David Daniels and Plácido Domingo.

“I’m always interested in trying to stretch the repertory in ways that can be appealing both for the artists and the public,” said Peter Gelb, the Met’s general manager. “I wanted to play the Baroque card, but with a faster dramatic rhythm tailored to modern attention spans.”

The operatic pastiche may be new territory to most modern audiences, but it has a rich heritage. It arose in the mid-17th century from practical need. The new opera houses sprouting throughout Europe sparked a thirst for repertory, which necessitated frequent revivals along with new works. In that singer-dominated era virtually all revivals were subject to major overhauls to accommodate new casts, and it was easier and cheaper to let singers substitute arias they already knew than to hire composers to write new ones. By the early 18th century these radically reworked revivals had been superseded by all-out pastiche.

The recipe for “The Enchanted Island” is drawn right from the 17th-century playbook: Take a familiar story (in this case Shakespeare’s “Tempest”), lard it with fail-safe preowned music chosen to showcase bankable stars, and tart it all up with lively spectacle. Voilà, you have an instant, musically foolproof, eminently buzz-worthy world premiere.

“In some ways it’s not that different from other Handel work I’ve done,” Ms. DiDonato, the leading lady, said. “The joy of Baroque music is that you get to personalize it through ornamentation. But this goes a step further. Sure, you can find many of the arias we use on YouTube. But now they’re in a completely new context.”

Ms. DiDonato and Mr. Daniels, a countertenor, are at the very heart of “The Enchanted Island.” Like his 18th-century predecessors Mr. Gelb has produced a star vehicle for two leading exponents of Baroque opera, backing them up with a strong supporting cast: the sopranos Danielle de Niese and Lisette Oropesa, the countertenor Anthony Roth Costanzo, the bass-baritone Luca Pisaroni and a promising young quartet drawn mostly from the Met’s Lindemann Young Artist Development Program. Mr. Gelb has scored the luxury casting of Mr. Domingo in a crucial cameo role.

Most prominent 17th- and 18th-century composers — like Monteverdi, Handel and Vivaldi, Gluck, Haydn and Mozart — assembled or contributed, knowingly or not, to pastiches. Many of Handel’s 42 operas qualify. There is little real difference between, say, Handel’s highly regarded “Rinaldo” (1711), which combines reworked arias from his earlier works with fresh recitative, and his less esteemed “Oreste” (1734), with new recitative and ballet music binding together recycled arias, though Handel billed the first as an original work and the second as a self-pastiche.

“They all did it,” said William Christie, the esteemed Baroque specialist who will conduct “The Enchanted Island.” “Handel did it every day of his life. The idea of plagiarism just didn’t exist. The point was to do it well.”

Mr. Christie echoes the anonymous author of “A Critical Discourse on Opera’s and Musick in England,” an account of London’s operatic life from 1705 to 1709. A pastiche, the writer insisted, must be “prepar’d by a Person that is capable of uniting different Styles so artfully as to make ’em pass for one.”

The Met has found such a person in Jeremy Sams, the British director, composer and translator who devised the plot and wrote the libretto for “The Enchanted Island.” Some two years ago he began gathering a wide variety of Baroque stage music, much of it unpublished, with expert help from Ellen Rosand, a musicologist on the faculty of Yale University. Their sources ranged from scholarly institutions to YouTube, where they found one of Ms. DiDonato’s main arias, an excerpt from “Il Pianto di Maria,” a cantata by Giovanni Battista Ferrandini long attributed to Handel. Several of the singers were asked to weigh in on the musical selections, and Mr. Christie also joined in the search.

“I was there to fill in the gaps,” he said. “Jeremy spent a couple of summers in my French country home, where I plied him with good food and wine, and we worked.”

Most of the “Enchanted Island” score is drawn from the operas, oratorios and cantatas of Handel, with a few of his hit tunes offset by more obscure excerpts. Many of the remaining vocal pieces are by Vivaldi. The works of the French Baroque composers Jean-Philippe Rameau, André Campra and Jean-Marie Leclair were mined for choral music and descriptive instrumental bits, at which the French excelled.

But wouldn’t combining Italian opera seria and French tragédie-lyrique produce stylistic discord, a disease endemic to pastiche? “My fear was that it would seem like a gala,” Mr. Christie said. “But Jeremy’s English singing translation binds it all together very well.”

Mr. Sams modeled the tone of his libretto on the 18th-century English pastiches and masques written by John Dryden and Alexander Pope. Essentially “The Enchanted Island” is Shakespearean fan fiction. It takes place in the otherworldly realm where Prospero, hero of “The Tempest,” lives in exile with his daughter, Miranda. Who should turn up but the two pairs of honeymooning lovers from “A Midsummer Night’s Dream,” coincidentally shipwrecked on that very isle. When Ariel, Prospero’s sprite, replicates the bumbling mischief of Puck, the madcap mix-ups of “Midsummer” are reprised to both humorous and poignant effect. The plot is further thickened by the sorceress Sycorax, mother of the evil Caliban and archenemy of Prospero. She is merely mentioned in “The Tempest” but here becomes a star turn created for Ms. DiDonato.

“Sycorax is a completely blank slate, unlike the other characters, and that’s thrilling,” said Ms. DiDonato as Kevin Pollard, the production’s costume designer, and the Met makeup artist Steven Horak painted her face with gold leaf in preparation for a photo shoot. “The playground is immense, and we’re experimenting, trying to figure out just who she is. This idea of making it up as we go along is typical of the pastiche process.”

The plot’s twisted threads are untangled largely by Neptune, a non-Shakespearean character created especially for Mr. Domingo, who counts it as the 136th role of his career. Rising from the sea heralded by special effects and the mighty Met chorus, he will serve as deus ex machina both for the drama and for the Met, most likely drawing crowds that might otherwise skip a Baroque opera.

“As the director of a theater myself, I know the importance of new operas,” said Mr. Domingo, who is general director of the Los Angeles Opera. “This one is old and new at the same time. But it’s new for me. Though I’m 43 years at Met, this is the first time I play a god.”

Mr. Crouch and Mr. McDermott, best known for an improvisatory, seat-of-the-pants style of theater essentially impossible at the mammoth Met, still manage to bring much of their trademark energy, spontaneity and whimsy to “The Enchanted Island.” Mr. Crouch’s set evokes an 18th-century toy theater, complete with two-dimensional painted flats and stair units. These physical elements are overlaid with digitally projected and animated images.

During the second week of staging, a rehearsal on the Met’s subterranean C-level stage revealed a meticulous scene-by-scene process, with Mr. McDermott creating blocking and motivation in close collaboration with his ensemble. “There’s constant revision going on here, of pitches, rhythms, text,” said Ms. de Niese, sporting a pair of wings over her jeans and sweater. “Everyone here has a say, and an open mind.”

“The Enchanted Island” offers an ingenious solution to the Met’s “Baroque problem”: How can a yawning, 3,800-seat arena designed for Wagner and Verdi hospitably host grandly conceived but intimately scaled Baroque opera? Of the Met’s four Baroque outings to date (including Handel’s “Rinaldo,” “Samson” and “Giulio Cesare”), Stephen Wadsworth’s beautifully made “Rodelinda” has pressed the Met’s bulk into the most successful service of 18th-century delicacy.

Despite Baroque opera’s remarkable recent surge in popularity, few 18th-century works, with their outsize proportions and elegant aesthetics, seem poised to enter the Met’s regular repertory. Meanwhile we could do worse than some freshly baked Handel and Vivaldi with a side of Rameau and a dash of Ferrandini.