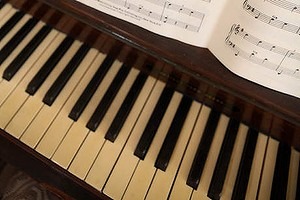 Choose carefully and you could get a piano that sounds good and is a good investment Photo: Michael Chambers

In this internet age of instant gratification the piano often gets short shrift. Rather than allowing it to collect dust in the corner, why not turn this instrument into an investment and bring sweet music to the home?


The piano is seen as a priceless heirloom for many families – an attractive piece of furniture occasionally used to inflict music lessons on the children.

Yet in this internet age of instant gratification – with its smartphones, 3D televisions and video game distractions – the piano often gets short shrift. Rather than allowing it to collect dust in the corner, why not turn this instrument into an investment and bring sweet music to the home?

Richard Reason, 65, who co-owns Piano Auctions in Bedford, England, points out that most inherited pianos are not worth anything to others, and often suffer the ignominy of costing money to cart away.

He said: “Sadly, most pianos are, at best, of mediocre quality, even if they have great sentimental value – they are just worthless pieces of furniture. This is because a century ago every home aspired to have a piano – it is what we had in our living rooms rather than a TV. There is now a huge glut of these old pianos, even though demand has gone.”

Reason adds: “Yet if you can buy a sought-after piano which has a good name and quality build, you are buying a recession-proof investment. At worst they should hold their value, but at the top end you can expect them to rise in price. Even during a recession, families tend not to skimp on education, and pianos can be a big part of this.”

The biggest blue-chip name is Steinway, but a brand new grand can cost as much as £100,000 ($146,000) and loses value as soon as it leaves the showroom. The investment market focuses on the second-hand pieces, where examples of a Steinway grand typically start at about £10,000 and go up in price depending on the condition and the model.

There are numerous other great makers, including the “three Bs” of Bluthner, Bechstein and Bosendorfer, as well as the early Steinway family offshoot, Grotrian-Steinweg, plus the modern piano-maker Fazioli, that also attract investors who want a quality name but do not want to buy new.

Although prices can start at less than £1000, cheaper pianos may be in need of expensive restoration. But from £2000 upwards there is no reason why a piano with a good label cannot be purchased that will at least hold its value over time.

Over the past decade, the prices of the most collectable grand pianos have doubled, thanks to an increase in demand – much of it coming from international musicians, particularly those in China.

Grand pianos are the most collectable because they are the most rare and tend to offer superior acoustics. But, at 9ft in length (274cm), may not fit in your home. The so-called parlour or boudoir grand, which is typically between 5ft and 7ft long, may be more practical. However, a baby grand that is less than 5ft may not be such a shrewd investment.

Reason says: “The so-called baby grand might compromise on sound. If you do not have the space or budget for a full-size grand then consider a top-quality upright piano. An upright with an overstrung iron frame can also provide better acoustics than a baby grand piano, as the strings in this instrument tend to be of greater length.”

Reason says: “Big price differences are due to a lot of factors – it is far more than just about the make and model. Many believe the ’20s were a heyday for piano-makers but, over time, unless the instrument has been well looked-after, the piano can easily have fallen into disrepair.”

Simon Hablin, a technician at piano restoration specialist Courtney Pianos in Oxford, says: “Condition is key. But before you throw out your old piano because it sounds out of tune, check with a specialist – not being a well-known name does not mean it can’t be valuable. It is vital for both buyers and sellers to get expert independent valuations.”

Hablin explains that the passage of time, and central heating, can warp the wood and metal of many pianos. He says a basic restoration of the actions and hammers, and re-felting might cost £1500, so it can be cheaper to buy a piano with pedigree rather than fixing a relatively worthless old model.

“If you want to keep a strong value you should treat it like a classic car and try to get it restored to its former glory. But an old Victorian piano can also be in better shape than a badly made modern instrument – in 100 years, the design of the piano has hardly changed,” he says.

Hablin explains that the piano should be treated as an attractive piece of furniture as well as a musical instrument.
The cost of a complete French polish restoration might add £2000 to the bill, but this cost should be more than recouped in the investment appeal it can bring. Special commissioned “art case” or Art Deco pianos are particularly sought-after by piano investors, with unique craftsmanship commanding a premium.

“A popular modern piano is the Yamaha, but it is important to realise some cheaper models are often put together with synthetic glues and made of veneer rather than solid wood. They can be great-value instruments but cannot be renovated the same way,” adds Hablin.

He warns against electronic pianos as an investment, as instruments that might have cost £2000 new can soon plummet in value when they are overtaken by later innovations.

The pianoforte, meaning “soft-loud”, was invented in 1709 by the Italian Bartolomeo Cristofori after he tinkered with a harpsichord to give it hammer volume control. Only three examples of a Cristofori survive today and these are now priceless artefacts.

In the ’20s and ’30s many households had a stand-up piano as the centre of family singalongs. The piano hit its lowest note in the ’60s when many thousands were destroyed during “piano-smashing” charity events. In more recent years, the survivors have had to fight it out with modern quality pianos made by the likes of Yamaha, which can provide great acoustics for reasonable prices, as well as the hi-tech electronic versions.

The Yamaha is a favourite among piano teachers for its consistent good quality, and if looked after should maintain its value. Decent U1 and U3 uprights can be picked up for less than £2000, though you can pay more for reconditioned models.

A professional piano tuner should be used to check out any potential purchase to save you from making a big mistake at auction or in a private sale. It is also good to involve the family when making any purchase. Aesthetics are important, but if you want children to enjoy the piano, let them join in the shopping. Buying a classic piano should be a fun and rewarding experience.

You need to consider the cost of looking after the instrument, too. The piano should be tuned once every six months and this costs at least £50.

Central heating can do permanent damage to piano wood, so be wary of keeping the investment too close to a radiator, or in a room with under-floor heating.

Although a piano should benefit from use – providing joy to musicians and listeners – there is no reason why it should not be seen as a beautiful piece of furniture that might appreciate in value.

Provenance can also play a role in the value of a piano – especially if someone famous once owned it. Unfortunately, even the finest heritage is unlikely to improve the skills of a pianist – though the quality of the note may sound better. You will still have to keep taking those piano lessons.

Famous pianos – sold for more than a song

A 1970 Steinway “Model Z” upright used by John Lennon to compose Imagine in 1971 was sold at auction for £1.67 million – £1.45 million plus commission – to George Michael in October 2000. The former Beatle also recorded the single on this piano.

As Time Goes By

A piano used by the actor Dooley Wilson as Sam in the 1942 movie Casablanca sold for £370,000 at a Sotheby’s auction in December 2012. Humphrey Bogart, who played Rick, actually said: “Play it, Sam”, referring to As Time Goes By, and not: “Play it again, Sam”. The piano was a Warner Brothers prop with 58 keys – 30 less than on a conventional instrument.

A piano used by Paul McCartney for the first rendition of Yesterday sold for £150,000 in April 2011. The 1926 green Eavestaff mini-piano was owned by a friend, the singer Alma Cogan. The Beatle had dreamt of the melody the previous night while in bed and went round to her house in 1964, fearing it might have been an existing melody.

A white 1910 “A-Day Birdcage” upright, used by Elton John in the early ’70s to compose in collaboration with Bernie Taupin, sold at auction for £91,000 in 2004. He used it to play classic pieces such as Your Song.