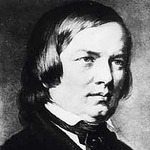 You might call them an early celebrity couple: young, famous, desperately in love, and doomed. Their story of defying the odds to live together happily – but not ever after, or even for long – might have made a gripping Puccini opera. It was irresistible for Hollywood, whose schmaltzy treatment of Robert and Clara Schumann you can guess from the 1947 title Song of Love.


In her day, Clara was the better known, thanks to a glittering career as a concert pianist, but today – the 200th anniversary of his birth – it is Robert who has become recognised as one of the most important influences on the 19th-century Romantic movement, a brilliant and adventurous music journalist, a generous-spirited encourager and, above all, one of the greatest composers.

Robert, born in Zwickau, in the German state of Saxony, on June 8, 1810, met Clara when he studied piano with her father, Friedrich Wieck, Europe’s foremost teacher, from 1831. Clara, then 12 and a prodigy, adored him but he fell in love only when she turned 16.

He unfortunately ended any chance of a virtuoso career himself by damaging his finger with a device he designed to strengthen it. Wieck had no intention of damaging his own financial prospects by allowing his famous daughter to wed an impecunious composer, and the pair had to go to court to win the right to marry.

In 1834 he launched Die Neue Zeitschrift fur Musik (New Journal for Music), in which he lambasted contemporary taste for pyrotechnic but superficial composers and promoted recently deceased masters such as Beethoven, Mozart and Weber.

Courageously, and with a near-infallible eye for ability, he championed contemporary composers such as Chopin and Berlioz, who were then little admired. He discovered and promoted Schubert’s Great C major symphony, and famously fell out with Liszt when the Hungarian genius criticised Mendelssohn at a dinner at Schumann’s house.

He also met Wagner, but the pair did not get on. The egotist barely drew breath to interrupt the parade of his opinions, while Schumann barely spoke. Wagner later noted: ”It is impossible to communicate with Schumann. The man is hopeless; he does not talk at all.” ”For me Wagner is impossible … he talks without ever stopping. One just can’t talk all the time,” Schumann said.

Schumann’s first meeting with Brahms in 1853 is characteristic. The young composer arrived at the Schumanns’ house unannounced and played his own pieces. Schumann said little before disappearing, and Brahms began to get nervous, before his host reappeared with Clara, insisting she hear this marvel. Robert’s diary notes: “Brahms to see me (a genius).” Brahms moved into the Schumanns’ home, and Schumann’s last article was to hail Brahms – as yet an unpublished composer – as “the chosen one” who would give “ideal expression to the age”.

If Brahms was soon admired, it took decades for Schumann’s genius to be recognised. The 19th-century American pianist William Mason said the composer was so little appreciated that when he entered the store of music publisher Breitkopf and Hartel with a new manuscript, the clerks would nudge one another and laugh. ”One of them told me that they regarded him as a crank and a failure because his pieces remained on the shelf and were in the way.”

The rise of the piano-playing middle class cemented his place in posterity, as so much of his music was accessible to amateurs. Today his best-loved works are very much part of the repertoire.

Schumann’s genius was to recognise music as poetry – a quintessentially romantic concept – and to master the miniature: short, character-filled pieces that might last only a minute or two. The most famous is Traumerei (Dreaming) from the Scenes from Childhood.

From early in his life, he was a volatile personality, swinging from elation to despair, from periods of profound creativity and enormous energy to times of despair and barrenness.

He wrote to Clara in 1838 that in 1833 he had “the most frightful thought a human being can possibly conceive – the most terrible that heaven could inflict – that I might lose my reason. This thought took possession of me with such violence that all comfort, all prayer vanished as if it were idle mockery … My breath stopped at the thought: ‘what if you were no longer able to think?’ Clara, anyone who has once been crushed like that knows no worse suffering or illness or despair that could possibly happen to him.”

And that, cruelly, was to be Schumann’s fate.

In 1854, while entertaining friends, he left the room without a word and threw himself into the Rhine in his dressing gown. Some sailors pulled him out. He suffered terrifying aural hallucinations, and later that year he admitted himself to an insane asylum, where he died after two years – probably of tertiary syphilis combined with manic depression.

As so often, it seems that great art is allied with great suffering.