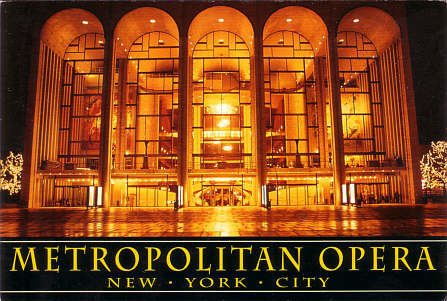 MEXICO CITY(AP) — The first thing opera buff Marcelo Perez did when he retired eight years ago was take a bus to the U.S. border and then a train to New York, where he realized a lifelong dream by catching a performance at the Metropolitan Opera.

From a nosebleed seat at the Met, the 76-year-old former office assistant for Mexico’s Treasury Department saw Puccini’s “Tosca,” which tells the story of a love triangle involving an opera singer, an artist and a police chief, as well as torture, murder and suicide.

“The music pierced right through my soul,” Perez recalled. “The experience was grandiose” [sic].

On a recent afternoon, Perez was preparing to catch another opera, Verdi’s “Il Trovatore,” but without the bus and train rides. This performance was being broadcast live from the Met to a packed house at Mexico City’s National Auditorium, the biggest arts and culture venue in the capital.

Growing numbers of people around Mexico and Latin America are filling auditoriums and movie theaters to catch simulcasts of live performances beamed from the Met. With low ticket prices and strong word of mouth, the broadcasts are introducing many in the region to the kind of world-class opera and dance previously available only in U.S. and European cities.

Opera simulcasts around Latin America are often sold out, and in Mexico City, the Met operas have been such a success with people of all ages that the National Auditorium this year added ballets staged by Russia’s Bolshoi Theater and the Opera National de Paris.

High-definition technology “has democratized these art forms and made them available to all the people who can’t afford to travel and pay the 300 dollars a ticket,” said Giovanni Cozzi, president of Rising Alternative, a New York-based company that has international distribution rights for the Bolshoi Ballet, Opera de Paris and Teatro alla Scala Milan, among other institutions.

Rising Alternative is distributing delayed broadcasts of Bolshoi Theater and Opera National performances to Mexico, Peru and Brazil. Outlets in Colombia, Argentina and Costa Rica have also expressed interest in getting the broadcasts next season, Cozzi said. The company distributes such works to 30 countries.

The Met program pioneered simulcasts with a performance of Mozart’s “The Magic Flute” shown in 60 places in the U.S., Canada and the United Kingdom during the 2006-2007 season. The program was so popular that the opera house expanded the high-definition satellite broadcasts to 1,500 screens in 46 countries, reaching 2 million spectators a year worldwide, said Met general manager Peter Gelb.

“The core audience is opera fans, but this is our tool to help develop new audiences as well,” Gelb said. “Opera is not for everyone. It’s for an intelligent audience that is interested in great singing, in great theater, but everything we’re doing is to make it available to as many people as possible.”

Spanish subtitles translated the Italian of Verdi’s dark masterpiece, which recounts a deadly rivalry between two long-lost brothers that results in infanticide and, yes, a climactic suicide.

Jorge Gutierrez, promotions director for the National Auditorium, said prices were kept low to attract opera newcomers and compete with other attractions in the city. The auditorium, which has the rights to distribute the Met program within Mexico, has expanded it to eight other Mexican cities.

“If you don’t know about opera and have never listened to it, it can be intimidating,” said Karina Pedroza, a 22-year-old nutrition student who was getting ready to watch her first opera at the National Auditorium, Wagner’s “Die Walkuere,” which closed the Met’s 2010-2011 season.

On a recent afternoon, about 700 people, mostly seniors, packed a small auditorium where Mexican opera expert Sergio Vela gave a pre-show talk and described Verdi’s melancholic tendencies in a blow-by-blow account of “Il Trovatore.” Some in the audience said the shows, despite their violent themes, were an escape from the drug wars engulfing parts of Mexico.

“Opera is filled with something special, and there are so many ugly things happening in our country that you can take a Saturday afternoon and come here and disconnect with these performances,” said Teresa Moreno, a 73-year-old housewife, who brought her 38-year-old son.

For Marcelo Perez, who lives on a monthly pension of about $380, the Met simulcasts offer him a chance to enjoy the art form he fell in love with after watching a local company’s performance of Verdi’s “La Traviata” in 1970 at Mexico City’s Palacio de Bellas Artes.

At the recent “Il Trovatore,” he broke into applause as soprano Sondra Radvanovsky, who played the heroine Leonora, sang her final aria, “D’amor sull’ali rosee” (“On the rosy wings of love”). The camera closed in on Radvanovsky’s pain-filled face as she lamented her beloved’s imprisonment, before poisoning herself in a final act of love.

“It would be better to see it live,” Perez whispered during the scene, “but it’s so well done that it captures you.”