Media
The future of the recording industry: is there one?
November 8th, 2010
Tags: society 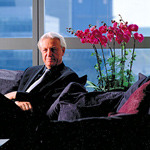 The record label Naxos has gone from budget outsider to industry leader in its 20-plus years of existence. But what does the future hold for any record label at a time when CD sales are plummeting and dowloads are stagnant?


Naxos’s founder and CEO, Klaus Heymann, is one of the most candid and straightforward executives in the business, and he’s tailored his long-term goals to the realities of today’s market; his goal, he says, is to be “the last man standing.” He spoke to me while in the States for marketing meetings about the Naxos’s future.

Anne Midgette: When we last spoke, you talked about your hopes for the Naxos Music Library.
Klaus Heymann: It’s no longer a hope; it’s a big thing now. It’s the fastest growing business we have. This year it’s up 25% on last year. Nothing else is up 25%. We just launched a video library as well: 400 programs, operas, ballets. You pay a monthly fee.

Downloads are stagnating. I don’t think this is a long-term [prospect]. There’s still a market, but growth is anemic: I think it’s up 1 or 2% over last year. In the year before it was much stronger. The big question is what will come next. The basic subscription service will be it, but whether or not you can get money for a subscription, it’s too early to say.

Quite a lot of people are trying advertising services. Spotify in Europe hasn’t made it to the U.S., but their revenue is anemic; no comparison to our own service [the Naxos Music Library]. Other services in the States have a free element and a paid element. It’s hard to convert people from free to paid — as the model of journalism shows. In the music world, the same thing is taking place.

Physical sales are still surprisingly strong in classical music, unlike pop and rock. In June, Naxos was 12% up on the month’s budget. The year to date is up 6% over last year. I think we’ve reached a level of sales where we cater now to a core audience: if you have a good release, it goes well. We make good money from physical product. We just took over distribution of Warner Classics for the States; that’s the big news of the month. Other majors are looking at us as well. All our distribution companies are very profitable, not necessarily from selling our own stuff; but we sell practically every independent classical label. From starting as a label, we’ve become the major distribution outlet of the industry.

ALM How much market fluctuation do you attribute to the recession?
KH Classical music wasn’t really affected much by the recession. I know people last January who had record sales; also this January went very well. I don’t know [what will happen] if there is another recession that affects a different part of the labor force. The 2008 recession hit manufacturing. People in manufacturing don’t buy classical music. We had a very good 2008 and 2009; I looked at the first six months of 2010, and we’re probably going to be the same as last year. But in the States, if they start firing school teachers and government employees, that will affect classical music sales.

ALM Are your marquee releases, recordings by Marin Alsop and Leonard Slatkin, profitable?
KH Frankly none of them make any money, if you ask me. Even the Bernstein Mass [with Marin Alsop and the Baltimore Symphony Orchestra], we sold 20,000 sets worldwide, has still not made any money for us. It’s in copyright; it cost us a lot of money to produce, and cost the Baltimore Symphony Orchestra a lot. At our price we have to sell a lot a lot of records to break even. For us these are prestige projects. It’s good for the label; we make money from licensing and distribution; it just goes from the pot. The only thing you can make money from these days is guitar solo or piano which doesn’t cost you anything [to record.] With an orchestra recording you have to sell 20,000, and nothing sells 20,000 these days. Unless you are a blind Japanese pianist. Then you sell 100,000 copies in Japan. [Heymann is referring to Nobuyuki Tsujii, the co-winner of the last Cliburn competition.]

The biggest headache we have is that so many shops have disappeared. Finding shops, bookshops, smaller chains. The end result is that Amazon is our biggest customer in many markets: the US, England, Germany. The market is there, but there are no shops.

We’re starting Blu-Ray audio doing a demo of John Corigliano’s “Circus Maximus.” I have the first prototype with me. I hand-carried it from the UK. It sounds spectacular. We’re going to come out with 10 titles in October, and then 4-5 a month. It’s probably the high-end medium of the future, with SACD almost dead.

ALM Oh, is SACD going?
This year worldwide sales were about 200,000 units. More and more indies are giving up.

[As for regular sales:] right now, in the first five months our recording of the Spohr concerto for 2 violins sold 7,000 worldwide. Then Vaughan Williams, “Dona nobis pacem,” 6,000 in only 3 months. 4,500 Vaughan Williams Sacred Choral Works. Alsop Dvorak Symphonies 7 and 8, 4,000 in only two months. Petrenko Shostakovich 8 Liverpool also about 4,000 in only 2 months. Khachaturian cello concerto also about 4,000. Haydn Stabat Mater from Trinity New York also 4,000, but that’s not selling so strongly any more. Roussel Symphony No. 4 also 4,000 in 4 months.

It’s a very odd repertory nowadays. It’s in many ways gratifiying that all this material [is selling]. Of course with sales of 4,000, you’re not making any money. [What really sell are things like] The Best of Chopin, which is is probably now up to 300,000 or 400,000 in total. Most of what is downloaded on iTunes is this kind of thing. They download the whole album. [As for our other releases,] many of these things will eventually reach 6, 7,000. Vaughan Williams Dona Nobis Pacem with orchestra and chorus, in copyright, probably loses us $10,000 or $15,000. But long term, with all our other revenue sources, we’ll probably break even.

ALM Can you continue to exist if you’re just breaking even?
KH This is a question has been debated in the company a lot. Our strategy is that we will be the last man standing in terms of distributing classical music. A lot of retailers, what’s left of them, actually like getting everything from one source. Outlets are trying to reduce the number of suppliers. We want to be the last man in terms of the distribution of the physical object. Overall, I have no doubt we will do very well with digital things. There are lots of ways of making money now. Let’s assume we’re the last man standing and have to close the warehouse; we can live comfortably off the other things we do.

ALM What happened to your former plan to sell iPods pre-loaded with music?
KH We have a try from Hanssler to sell the complete works of Bach on an iPod. It hasn’t been a huge success. Our Japanese company just tried a USB stick with 5 hours of Chopin. It’s packaged like a normal CD, but with a picture on the cover saying it’s a USB stick. They sold 350 copies in 6 weeks. That’s encouraging, but not great.

There’s a guy I met in Hong Kong who showed me a prototype for a USB player. There would be some movement there. It looks like a very expensive piece of metal, highly polished; it looks like a high-end product. You fold the USB stick out and stick it into the machine.

We’re not dead yet. There’s so much creativity. Do you read Digital Music News? Just reading that every day, all the ways people are trying to sell music: it’s exciting.