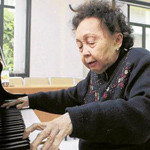 The 92-year-old pianist worked with Ho Chi Minh and other musicians to bring classic Western music to the country and keep its conservatory going through war and beyond. The Vietnam National Academy of Music also teaches traditional Vietnamese music.


The classroom at the Vietnam National Academy of Music could be almost any place in the world where piano is taught. The furniture and lighting are institutional. The walls have soundproofing. There is a long table for instructors and a decent grand. Down the hall, though, hangs a wacky photo of Ho Chi Minh in band master whites cheerfully conducting an orchestra.

Seated at the studio’s table one day last March was a tiny woman, under 5 feet tall and 92 years old, the matriarch and grande dame of Vietnamese music and a founder of the academy. Next to her were her daughter, the former rector of the academy, and granddaughter, Thu-Nga Dan, who lives in South Pasadena.

I asked Thai Thi Lien if she would play for me. She laughed nervously and apologized that she was under the weather and hadn’t practiced for three weeks. She had just returned to Hanoi for an extended visit from Montreal, where she now lives with her son, Dang Thai Son, Vietnam’s most celebrated classical musician. In 1980, he was the first Asian to take first place in the prestigious International Frederic Chopin Piano Competition, held every five years in Warsaw.

But she gamely picked up her cane and marched to the piano and began to play Chopin. Her sound is huge, soul-stopping, the kind you might expect from a burly key-crusher trained in Eastern Europe. When a local Vietnamese photographer hired by The Times clicked his camera too close to her face, she imperiously shooed him away like a mosquito.

A few wrong notes couldn’t prevent melodies from singing out or hinder the lustrous sheen of her tone. Mainly, though, there was that sound, stirring enough to stop a B-52 bomber. Or attract one, as some North Vietnamese villagers feared it might during what is called here the American War.

After she finished playing, Madame Lien, as she asks to be called, flirtatiously brushed off compliments and began to recount — in a mélange of English, French and Vietnamese — her remarkable story. With a little help from her friends, Ho being one, she played a decisive role in creating a classical music tradition for her country, and her persistence during North Vietnam’s wars with the French and Americans helped maintain that tradition.

Thai Thi Lien was born in Saigon (now Ho Chi Minh City but still informally called Saigon by most Vietnamese) when it was an exotic French colony. “My father was the first engineer in Vietnam,” she said. “He studied in France, and he brought back many recordings of opera. He decided I should learn piano.” She was 4, and a few intrepid French piano teachers of varying quality had made their way to Indochina.

She spent her teens studying with a pupil of Chopin and grew into a fine virtuoso. But a career as a concert pianist for a young Vietnamese woman — her granddaughter describes her as having been a great beauty and a free spirit — was unthinkable at the time. Her traditional family arranged a marriage. Madame Lien’s hand gesture describing her first husband is the same as the one that dismissed the photographer. Husband No. 1 wasn’t in the picture for long.

Although fighting between the French and the Vietnamese had already broken out in 1946, Lien moved to Paris to study, and there she met and married Tran Ngoc Danh, a Communist political operative who was trained in Moscow and whom some historians suspect was a KGB spy, although Madame Lien adamantly denies this. He was part of Ho’s delegation that hoped to negotiate independence from the French.

Ho and Tran Ngoc Danh were not successful, so the newlyweds went to Czechoslovakia where Lien enrolled in the Prague Conservatory. When she received her diploma in the early 1950s, she became the first Vietnamese woman to obtain an advanced degree in music.

Much of her time in Prague was spent apart from her husband. Tran Ngoc Danh remained politically active and controversial, working mainly in Bangkok. When Lien did finally join him, he was in the countryside of North Vietnam with Ho and the Viet Minh forces. She made the arduous journey from south China to the Vietnam jungle on foot carrying her 22-month-old daughter.

She remained with the Viet Minh for two years until the French were routed in Dien Bien Phu in 1954. Her first son, Tran Thanh Binh, now one of Vietnam’s most prominent architects, was born in that jungle and her husband died in it of tuberculosis.

When Ho took charge of the new country, he asked Lien to record her arrangements of Vietnamese folk songs and lullabies that she had regularly played for him and the troops. Vietnam was a country that had endured centuries of foreign occupation, and Lien’s recording was embraced as a national symbol for a people reclaiming their own culture.

Madame Lien is careful not to take full credit for founding the Vietnam’s first music school in Hanoi, where she settled after Dien Bien Phu and remarried. Her responsibility was the piano department, she says. But her co-founders were all self-taught musicians, and she was the one who, having learned Czech in Prague had also picked up just enough Polish, Romanian and Russian to hire music professors from the Soviet bloc countries friendly to Vietnam.

The school expanded haphazardly, with classes scattered in buildings throughout Hanoi. Scores were in short supply, and students had to make their copies of Beethoven sonatas by hand. But Madame Lien says that the music-loving Ho began a commitment to fully funding the school that the Communist government continues to this day.

In 1965, when U.S. planes began bombing North Vietnam, the government relocated the 500 students to a neighboring village 30 miles away. The school’s 60 pianos and other instruments were carried on ox carts. “We lived with the peasants, and classes were taught underground,” Madame Lien said. “It was terrible.”

The uneducated farmers were annoyed by the noise of unfamiliar musical instruments and were terrified that the racket would attract enemy aircraft. There was no electricity. Classes were held in bunkers dug deep in the earth.

Most of the pianos, though, had to remain above ground, taking up space and making the villagers’ quarters all the more cramped. Piano students took turns practicing around the clock. There was never quiet.

In the village, Lien looked after her youngest son, Dang Thai Son, who was born in Hanoi in 1958, and taught him piano when he wasn’t frolicking with his peasant playmates. Her teenage daughter Tran Thu Ha (a pianist) and son Tran Thanh Binh (then a cellist) were assigned quarters apart from their mother and with the older students.

Tran Thu Ha recalls learning Beethoven’s “Moonlight” Sonata on a literally ratty piano — rats nibbled on the hammers and chewed the pedals. And she learned it in the moonlight..

“I remember,” she says, “that if we wanted to listen to a recording we had to go very far to a town where there was electricity. To hear a concert in Hanoi we would ride bicycles or even walk, and it was safe to only go at night.

“And when we heard announcements of enemy aircraft, we would have to make a decision whether we jump in a ditch or keep walking. There was a chance the bombs were not going to hit us, but in the ditches there were a lot of snakes. So we decided, let’s keep moving. Either you die immediately or get bitten by the snakes and die slowly.”

Through it all, the school thrived and actually grew, thanks to the demand for musicians to entertain the troops. Many of the students played for Ho himself.

But Tran Thu Ha and her brother were also quick to leave as soon as they could. Although the school remained in the countryside until fighting stopped in 1973, Ha enrolled in the Kiev Conservatory in Ukraine in 1969. Tran Thanh Binh followed her but by then had given up the cello and studied architecture in Kiev.

Ha later got a doctorate in piano at the celebrated Tchaikovsky Conservatory in Moscow and, back in Hanoi, became an instructor in the piano department of her alma mater, which had grown into the Hanoi Conservatory of Music. She worked her way up to rector in 1994, a post she held until stepping down two years ago. Under her, the school became a prominent institution, opening satellite conservatories in Hue and Ho Chi Minh City, and it is now the Vietnam National Academy of Music. The main campus in Hanoi houses 1,800 students who learn either Western classical music or traditional Vietnamese music; there isn’t much crossover.

Meanwhile, Dang Thai Son followed in his older sister’s footsteps to the Tchaikovsky Conservatory and Lien accompanied him to Russia. While a student in Moscow, he entered the Chopin competition. His 1980 First Prize in Warsaw was at first tainted because Ivo Pogorelich was eliminated for being too flamboyant, and juror Martha Argerich walked out in protest.

But Argerich has since put her support behind the Vietnamese victor. Both were jurors this autumn at the competition, when it coincided with the 200th anniversary of Chopin’s birth. And while Pogorelich’s career has pretty much fizzled out, Dang Thai Son has become a celebrated Chopin interpreter, currently making a series of recordings on 19th century pianos like the ones Chopin would have used.

Vietnam is too small, still too poor and has too many of its own national musical styles (probably more per square mile than any other nation) to challenge China, Japan or Korea as an Asian superpower in Western music. But Madame Lien and Ho instigated a deep-seated sense of musical culture that embraces East and West equally. And as Vietnam emerges on the world scene economically, it is also becoming ever more vibrant musically.

In Hanoi, Madame Lien’s architect son, Tran Than Binh, who was in Los Angeles this year to visit the Walt Disney Concert Hall, has designed his country’s first modern major concert hall, now under construction at the National Academy. It is scheduled to open next fall. It will be dedicated to Thai Thi Lien. Her other children no doubt will be soloists in the opening concert. By all rights, the hall should be named for her as well, but that is for the government, which is covering the cost, to decide.