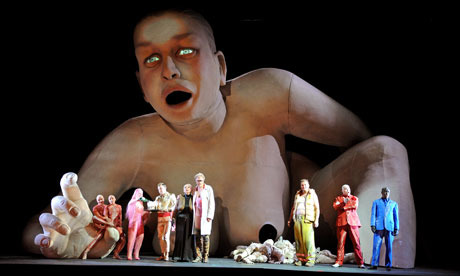 Contemporary classical music is devoid of melody and appeal, all noise and no fun. At least, that’s the cliche. But this is music that is very much at the heart of our modern world

There are two sides to this. First, there’s the simple fact that much of the music being written now by composers for choirs, opera houses and orchestras has as many, and sometimes more, tunes than anything by Beethoven or Mozart. For sensuous, harmonious reverie, listen to recent music by John Tavener or Arvo Pärt; for sheer, abundant tune-smithery, look no further than those masters of choral, regal and festive vocality Paul Mealor, Eric Whitacre and John Rutter. But none of this is what the “squeaky gate” critics mean. They are thinking of the sort of music that the conductor Thomas Beecham once said he “trod in”: the avant garde of Karlheinz Stockhausen, Pierre Boulez, Luigi Nono or Brian Ferneyhough. One of the best answers to this sort of attack comes from “unherd” on my classical music blog: “‘Nasty squeaky gate’ can actually be amazing to experience if you’re not afraid of it.” You’re right, unherd. As ever, fear, or preconceptions, lead to the dark side. First, one of the signal, culture-changing achievements of contemporary music is that it opens your mind and ears to re-hear the world, to realise the beauty that’s around us in sounds we would otherwise call noises. That’s part of the genius of John Cage or Helmut Lachenmann, one way in which the world becomes a different place when you listen to their music. But there’s something else: the visceral impact of music such as Iannis Xenakis’s Jonchaies, Stockhausen’s Gruppen for three orchestral groups or Luciano Berio’s Coro is like nothing else music has done before. This music opens up huge reservoirs of feeling and physicality. Listen to any, and have your squeaky gates of perception opened up.

Balderdash. Rewind a few decades. Have a look again at the menagerie of cultural icons on the cover of the Beatles’ Sgt Pepper’s Lonely Hearts Club Band. Who’s that cheeky chappie on the back row, whose big brown eyes and side-parting peer out between Lenny Bruce and WC Fields? Why, it’s the furthest-out composer of any of the out-there 60s avant-garde, Stockhausen. A piece of coincidental Beatlemania? Not a bit of it. Without Stockhausen’s electronic dreams and experiments the decade before, and his trailblazing example of how you could use the studio itself as a musical instrument, the Beatles would be mired in musical pre-history, and Lennon and McCartney’s imaginations – and yours – would be infinitely the poorer. Spooling on through pop culture, in the 70s and 80s, bands “discovered” tape loops, phases and rhythmic complexity. But that’s only because Steve Reich, Philip Glass and the minimalists had got there at least a decade before. Sampling? Again, it’s the avant garde you’ve got to thank, everyone from the pioneers of tape-based musique concrète to Alvin Lucier and beyond. Coming bang(ish) up to date: who is Björk’s favourite composer? Stockhausen again. Brian Eno would be nowhere without Erik Satie and Cornelius Cardew, Stephen Sondheim owes it all – well, some of it – to lessons with Princeton-based serialist Milton Babbitt, and don’t get me started on Jonny Greenwood’s love-affair with Krzysztof Penderecki. Without the “classical” avant garde, pop music just could not and would not be the same.

3. You need to have a beard and wear a black polo-neck jumper to appreciate it

This is one of the real things that puts many listeners off, the idea that to be able to understand Harrison Birtwistle or Judith Weir, Pauline Oliveros or Howard Skempton, you need to have a working knowledge, and preferably a PhD, in music history from plainchant to Prokofiev, and/or you need to be part of a club of contemporary music groupies. Neither, I promise you, is true. There’s a story told by Gillian Moore, who runs classical music at London’s Southbank Centre and who set up the pioneering education work of the London Sinfonietta in the early 80s. One of its first projects introduced a programme of Ravel and early 20th-century visionary and noise-fiend Edgard Varèse to groups of schoolchildren. For many, Ravel’s music is sensual, beguiling, “easy”, whereas Varèse’s sirens, percussion and atavistic modernism make his music beyond the pale, dissonant, and “difficult”. What happened was just the reverse: the kids loved Varèse and couldn’t get on with Ravel. But that makes perfect sense. So much of the great, radical music of the past 100 years bypasses the world of convention and intellect to go straight to the guts of sonic power, and to shake up your solar plexus. There’s a good argument that the less you know about Mozart or Schubert, the more directly you can understand the sounds composers create today.

A simple formulation that sums up an unfortunate commonplace: the sense that this music has nothing to say to today’s world. As already said, many of the sounds that we think most define our world today in pop music have the avant garde in their DNA, but there’s more. There is sometimes an impression that composers who write music that pushes musicians to their extremes are doing nothing more than fiddling around with meaningless notes in a solipsistic, self-indulgent reverie. Well, there’s nothing wrong with beauty, and the extreme, hard-won beauty of hearing a group of great musicians or an orchestra at the limits of what they can do. But contemporary music has things to say, if we have ears to hear it. And thanks to generations of recent composers, contemporary music has tried to change the world. Haven’t heard of Cornelius Cardew? Check him out. All his music was composed with social and political consciousness at its heart. And in different ways, that’s still happening. John Adams can’t resist today’s big subjects – politics, terrorism and religious extremism. Younger composers are forming collectives that dissolve the pernicious boundaries between genres and institutions, creating work that speaks to new audiences directly, powerfully – and relevantly.

5. It’s written for classical musicians so it must be ‘old’

Ah, yes: here’s the rub. For some, the very sight of, say, an orchestra, a string quartet or the idea of an opera house automatically gives an illusion of “heritage” rather than “contemporary culture”. The implication is that those institutions or lineups can’t have anything to contribute to musical thinking, that the musical ideas that composers in the past have dreamed of in their orchestral works, quartets and operas, have filled the repertoire, and our imaginations, to the brim. Try telling that to Jonathan Harvey, whose expansion of the orchestra into the realms of electronics makes music that is definitively contemporary and immeasurably timeless, or to Thomas Adès, whose writing creates visions of musical possibility that are new for today, or for any time. A piece that Adès composed in 1999, on the eve of the millennium, symbolises the new meanings that large-scale music can have. America: A Prophecy is a vision and a warning about the ends of empire. Adès’s music could not speak more fervently or fearlessly about the essential truth of the way historical patterns repeat themselves, and how we ignore the warnings of ancient civilisations at our peril. Don’t let the veneer of the opera house or the concert hall put you off. This music is speaking to us now: all you need is an open mind and open ears.