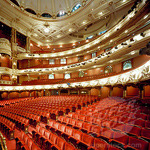 The English National Opera can hardly be accused of artistic stasis, having announced operas by four living composers as part of its 2011-12 season. Among them is John Adams and Alice Goodman’s 1991 work, “The Death of Klinghoffer,” about the hijacking in 1985 of the cruise ship Achille Lauro by the Palestine Liberation Front.


Tom Morris, who staged the West End and Broadway hit “War Horse,” is to direct.

Performance history of “Klinghoffer” has been dotted by cancellations and protests, due to its delicate subject matter. ENO Artistic Director John Berry calls it “probably the most controversial piece of the last 50 years,” although “Anna Nicole” and “Jerry Springer the Opera” offer stiff competition.

Also scheduled are new productions “The Marriage of Figaro”; Rameau’s “Castor and Pollux”; “Eugene Onegin”; “The Tales of Hoffmann”; “The Flying Dutchman”; and a new “Billy Budd,” directed by David Alden.