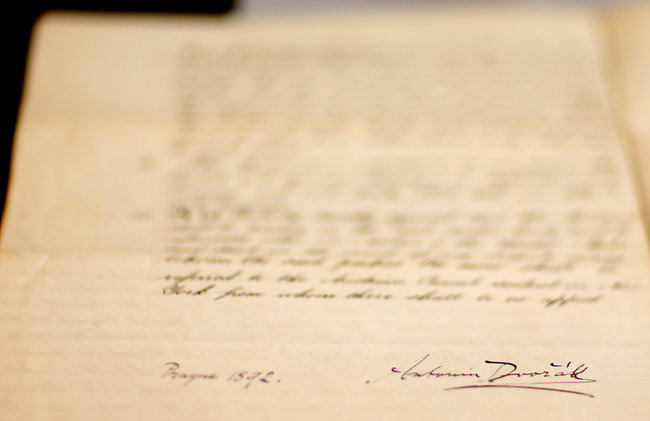 It was an audacious act of Gilded Age New York. Jeannette Thurber, a wealthy patron trying to create not just a new American music school but, more broadly, a new American school of music, decided in 1891 to hire one of the greatest composers of the day: Antonin Dvorak.

She offered him $15,000 a year — more than 25 times what he made at home in Prague — and promised him summers off. In exchange, she made him promise to work regular hours six days a week at her school, instruct “the most talented pupils only” and conduct concerts.

After months of trans-Atlantic negotiations, they eventually struck the deal that brought Dvorak to New York City in 1892 for an eventful three-year sojourn to lead Mrs. Thurber’s National Conservatory of Music of America — a period in which he composed some of his best work, including his American-inflected “New World” Symphony and Cello Concerto.

The contract that brought Dvorak to the new world — six pages of gracefully handwritten clauses, bound by green ribbon — was recently discovered in some old files by one of Mrs. Thurber’s great-grandsons after a death in the family. The Dvorak American Heritage Association, which purchased it for an undisclosed sum, will display it publicly for the first time on Sept. 8 at the Bohemian National Hall on East 73rd Street in Manhattan, to mark the composer’s 172d birthday.

If its convoluted language sometimes calls to mind another famous musical contract — it can be difficult to read all the discussions of the “party of the first part” without thinking of Groucho Marx’s Otis B. Driftwood in “A Night at the Opera” — the document’s enduring musical legacy makes it an object of fascination more than 120 years after it was signed.

“Jeannette Thurber really wanted him,” said Majda Kallab Whitaker, the curator of the exhibition, which will be held in the hall’s Dvorak Room, and will also display copies of negotiating letters. “It was part of her showmanship; I like to use the word impresario to describe her. She was really constantly enticing, manipulating, working with the press — the negotiation was not even complete and she was notifying the press that he’d accepted.”

Dvorak, then 50, was reluctant, though. His letters at the time mentioned the staggering $15,000 offer. “Should I take it? Or should I not?” he wrote in one. In another, he wrote: “What people say of America is very mixed.”

One of his six children, Otakar Dvorak, wrote decades later that it was his mother, Anna, who most wanted to go, to improve the large family’s finances. In his book “Antonin Dvorak, My Father,” Otakar Dvorak described how his mother forced a family vote at lunch one day — and how his mother acted swiftly after those in favor of the composer’s going to New York carried the day.

“They went into the study and she gave him a pen to sign the contract,” he wrote. “After he returned to the lunch table, Father declared that it was not definite as long as the contract was at home. So Mother took the contract and delivered it to the post office.”

Though the contract that will be displayed is signed at the bottom “Antonin Dvorak, Prague, 1892,” the date at the top of the contract is not filled in — which Ms. Kallab Whitaker said indicated that the contract may indeed have been signed in haste, as Otakar suggested.

The contract gives a clear sense of what both sides wanted. Mrs. Thurber sought an illustrious, esteemed figure to help put her new school on the map, and Dvorak strove to make sure he had time to compose.

Mrs. Thurber promised to pay Dvorak $7,500 to the Bohemian Union Bank of Prague before his departure, and to give him the rest in installments. She promised that four months each summer would be at his “free and absolute disposal” — he spent the summer of 1893 in Spillville, Iowa, a Czech-speaking farm village — and promised him six steamer tickets, first class.

Dvorak, for his part, agreed to spend three hours each day, six days a week, giving his “sole attention” to his duties as musical director of the conservatory. Mondays, Wednesdays and Fridays he was to spend two hours preparing students for concerts and to hold office hours for the remaining hour. On Tuesdays, Thursdays and Saturdays, he was to spend all three hours “giving instruction in composition and instrumentation to the most talented pupils only.”

And he promised to give up to six concerts a year.

The exhibition serves as a reminder that Mrs. Thurber’s late 19th-century vision of a music school was in many respects ahead of its time: it was open to female and black students and offered scholarships to gifted students. An African-American student there, Henry Thacker Burleigh, introduced Dvorak to spirituals, which informed his American works.

“I love Dvorak — he’s the greatest — but in some ways the amazing hero is also Jeannette Thurber,” said Michael Beckerman, a professor of music at New York University who wrote “New Worlds of Dvorak: Searching in America for the Composer’s Inner Life.” “If you wrote a novel about somebody that progressive in the 1880s and ’90s, people would think you were making it up.”

Not everything worked out as planned. The Panic of 1893 soon ate into the Thurber family fortune, and the promised payments to Dvorak became irregular. Scholars believe that when Dvorak returned to Prague a few years later, he was still owed several thousand dollars.

In the end, Ms. Kallab Whitaker said, the contract served both parties.

“Jeannette Thurber herself said that bringing Dvorak here was the greatest source of pride in her 35-odd-year career at the conservatory,” she said. “And Dvorak, certainly, it’s considered that he wrote some of his best pieces here, and he had to know that. He had ample time to explore his ideas here, and was prolific. He has to have been satisfied with it. He was anxious to get home, but he did a lot here.”