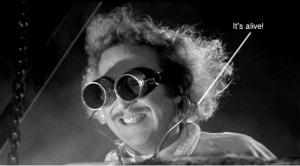 There’s a tiny boil of anger heating up just just beneath the surface in the classical music world, a boil just begging to be lanced. Witness, as exhibit A, the partly hysterical responses to my most recent post about classical music.

I had postulated a very simple thing, after which I asked a single unadorned question:

My postulate was merely that the concert experience we enjoy today has not always been the same as we find it now. And to illustrate that claim, I cited several primary and secondary sources from a much larger body of literature that provides supporting evidence. This hardly seemed controversial.

At that point, I asked my fellow readers what still seems to me to be a useful question: “Are there any things we can do to improve the concert experience to make it more connective to a greater body of people in our time and our place?”

What followed was a veritable tsunami of bottled up… well something.

The usual suspects were present, of course. They began, naturally, with our old friend, the ad hominem (“Dare doesn’t know what he’s talking about,” “must be a horrible fellow,” “a real trouble maker”) which of course were entirely unresponsive to the question that had been posed.

Then from there, a hapless gaggle of writers took the predictable straw man approach (“he wants us to clap between every movement,” “it’ll be chaos,” “talking everywhere,” “cell phones going off, texting,” “we’ll be buried in a tidal wave of candy wrappers,” “soon fist fights will be breaking out.”) None of this, of course, had anything to do with what I actually wrote.

A great many of the comments, to be fair, were enflamed more by other commenters, egging one another on like villagers with torches and pitchforks, ready to drive the dangerous Frankenstein monster from their midst, than they were by anything material in my essay. That is all fine and good. It is part and parcel of the delicious new democracy the Internet is allowing us to create together.

As the chatter wore on though, increasingly thoughtful people began to enter the discussion, some making cases extolling the value of silence, contemplation and attention paying. By and large, by the way, I agreed with those folks, except of course for the uglier strain of that theme that took the form of “I’m not here for the audience, I’m here for me.” Well, good luck in the future with that plan.

In case it settles down the more jumpy music lovers in our midst, by the way, I will disclose that I personally enjoy sitting in meditative silence during the many concerts I attend, and I probably always will. I’m introverted when it comes to listening to music. But that’s mostly because I have been trained to behave in that manner. I have nothing against my own traditions, nor have I arrived on the scene to spoil anyone else’s quietude, you may rest assured. But I believe we must consider our situation from outside our mere personal needs if we are to give music the hearing it actually deserves.

The harsh truths revealed by the sheer weight of the numbers pressing down upon the orchestra world in Western countries, in fact, force us to engage a larger frame of reference:

The world’s population is growing by leaps and bounds, and yet at the same time live classical concert attendance (particularly in America) is shrinking considerably. If we continue then moving rigidly in the direction we are now being led by our own possibly angry (if outwardly rather dignified) intentions, we shall all have our precious silence in abundance quite soon. Too much silence. Nothing but silence. No music. No performances. Just emptiness.

The Way to a Better Future

That dismal fate, however, need not be the final coda we perform together unless we are collectively stupid enough to let the current trends continue on their merry way, inch by inch, little by little. Indeed, the NEA estimates there are today still a whopping 234 million intelligent, beautiful, worthy people living in our country who almost never attend classical concerts. And those are the good folks I was thinking about when I wrote my prior article, and about whom I continue to think now.

That is one of the things leaders do: try to imagine what the experience of those they serve might be like, reimagine things, try to find new ways to connect the best of the old with the best of the new.

If classical music is so valuable (and I believe it is) then we ought to be eager to share its joys with those not “in the club” yet, so to speak. In spite of those who quibbled with the title of my last piece, I still believe not sharing something as wonderful as what we have in music is indeed “awfulness” — and even worse would be not even wanting to share it with others because they might be a bother to us.

Ultimately, shouldn’t everyone to have the opportunity to experience what we love so much about the classical music world? Don’t we want them all to sing, to dance, to listen, to laugh, to cry, and to become freer by the power of music, if they are willing?

I was interested by a book I read last year that had nothing at all to do with music, Racism without Racists, by Eduardo Bonilla-Silva. The essential thesis was that although overt racism has fallen out of fashion in America, de facto discrimination nevertheless continues unabated in new more subtle forms between in and out groups within our society. Having made this bold claim, the author then struggles for several hundred pages to find ways to overcome the lag.

For our purposes, the book’s argument is, I believe, germane to other areas as well. To a large extent, the author’s thesis may be similarly applied to various aspects of gender inequality, diversity in sexual orientations, class distinctions, and some of the more isolating behaviors of political factionism — anywhere, in fact, in which an “other” may be defined and then easily set aside or gotten rid of. These issues impact our nation every day. And we should be careful not to allow this insidious pattern to embed itself into our musical life too. Music should rather bind us together, it should connect us.

The Danger of Music

Closer to home, I am reminded of Richard Taruskin’s most recent book, The Danger of Music and Other Anti-Uptopian Essays which is my favorite from among his many challenging tomes, all of which I have eagerly devoured. To read the preface alone, is to be forever changed: “Utopianism always entails a body count” he gravely begins.

I remember reading this line the first time, and aside from being wholly gobsmacked by Taruskin’s formidable intellect, I was initially a bit confused by his caution against utopianism. Utopia is a “good” idea, isn’t it? I thought it’s what we wanted to achieve?

But “what utopians envision is not a better world. It is a perfect world,” he explains. “And that is what makes them dangerous, because if perfection is the aim, and compromise taboo, there will always be a shortfall to correct — a human shortfall.” Now his meaning began to become clear to me. “And if you or I really believe we have the means of perfecting the world, you may feel justified in doing away with me, or I with you.”

Then, lest we miss the connection to music he is suggesting, Taruskin concludes, “Incremental progress is the best defense against the blandishments of utopian thinking. Those who believe in human progress without believing in perfectibility will seek the best for their fellow human beings without being tempted to enslave them. The narcissistic contempt for what is attainable resembles the contempt so many music critics entertain toward musicians who try to write good music (not “great music”) and give good performances (not “great performances”) and who define the good in terms that relate to their actual, real-world audiences. There is the nexus between political utopianism and the kind that infests the world of classical music, and there is my reason for so passionately opposing the latter, even in the absence of a body count. For there are casualties even so, and the main one has been the toll utopianism has taken on the value of classical music to and in contemporary culture.”

Make of Dr. Taruskin’s invocation what you will. I, for one, agree with him completely.

And moreover I believe the declining classical music attendance numbers and broken budgets and ever weakening support for our art form nationwide are partly the result of not heeding his warning against the danger of trying only to protect the ideal, the already known and complete, rather than also creating the new together in joyful experimentation which is at the heart of nearly all music.

And that is why I have and continue to encourage us to think ever more deeply here about ways we can improve the situation.

If the concert experience we have now is the best that can be had, then so be it. But if we can devise even more ways to connect our beloved music ever more meaningfully with new audiences, why not give it a try?