Media
The classical music world can be obsessed with glitz, celebrity and sex appeal – but not Verbier Festival
November 23rd, 2011
Tags: destinations 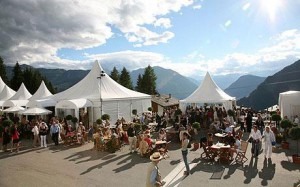 Verbier Festival is a glitzy affair

This year’s Verbier Festival – the ultra-classy annual meet of music superstars that happens 1,500m up in the Swiss mountains – has been surreally accident-prone with its turnout of artists. Conductor Charles Dutoit cancelled his opening concert. Thomas Quasthoff cancelled a performance of Elijah. Bryn Terfel substituted for Quasthoff but then lost his voice as a result and cancelled his appearance in a semi-staged Tosca two nights later. For good measure, the advertised Cavaradossi also pulled out. And tonight there should have been a concert with Gidon Kremer – except he’s pulled out too.

Every one of these no-shows has been attributed to illness (the standard diplomacy). But Kremer was having none of that and responded by publicly circulating a letter to Verbier’s Executive Director Martin Engstroem that states in no uncertain terms the real reasons for his withdrawal.

According to the letter, he’s decided he doesn’t like the idea of participating in a meet of superstars (even if he does happen to be one himself). Verbier, he says, is too celebrity-driven. Too glitzy. Too much a “summit of names”, as the letter has it, of a kind “who are often themselves quite EMPTY and artistically lost, chasing a hunger for recognition over ability”. He continues: “I simply do not have enough energy to support gatherings and collaborations on highly exposed stages with rising or approved stars of today’s music business for the sake of ovations and name-dropping”.

Now Gidon Kremer is a maverick but respected figure, and there are aspects of the criticism in this letter that will resonate with anyone who knows about the music world. A lot of classical music marketing does, as Kremer complains, exhibit a “misguided fixation with glamour and sex appeal”. A lot of it promotes the pretty and opportunistic over the worthy and able. And far too much of it – at Glyndebourne and the like – is seduced by wealth.

But is Verbier a prime example? I don’t think so.

I happen to have been there for the past few days and experienced at close quarters the furore caused by Kremer’s letter. But I haven’t experienced anything that justifies the direction of his attack.

This was my first time in Verbier. I’m not a regular, I have no cumulative loyalty to the place or friendships to defend. I think I count as an impartial observer. And I’ll admit that the self-image Verbier sells to the world is glitzy: an exclusive club of glamour names – Evgeny Kissin, Martha Argerich, Maxim Vengerov, Joshua Bell et al – having a good time in a swanky ski resort, sponsored by Rolex watches. You see the posters and think Salzburg, bankers, private jets and limousines.

But the reality, as I was surprised to discover, is nothing like the image. Yes Verbier is full of stars, but it’s equally full of young musicians who come (mostly on bursaries) to learn from those stars: to be coached by them in the Verbier Academy, or play alongside them in the Verbier Festival Orchestra.

What’s more, apart from one or two large-scale events like last night’s Tosca (in which the orchestra was the star of the show: a sensational performance that outclassed, and outsized, most of the singers) Verbier’s stars are there to play chamber music – a serious undertaking not naturally associated with glitz. In some ways Verbier is a Wigmore Hall with mountains, and its clientèle is fairly Wigmore Hall as well. You won’t find diamonds and designer frocks. You barely find a tie. There’s very little audience swank; and by comparison with Glyndebourne or Grange Park it’s almost shabby – at Martin Engstroem’s specific request.

As he told me yesterday, “I always ask our sponsors and their guests not to dress up, to leave their ties at home. For crying out loud, we’re up in the mountains”. And on the subject of sponsors, the presence of Rolex is refreshingly discreet. I know plenty of music events where the sponsorship is so obsequiously acknowledged it’s offensive. But this isn’t one of them.

I write all this because I think Kremer’s attack on Verbier is unfair and undeserved. The stars of this festival are the kind who have earned their fame by the immensity of their talent. At Verbier you don’t find Katherine Jenkins warbling in a diamanté skirt or any of the tacky nonsense of Il Divo and the Opera Babes. You find true greatness – in extraordinary encounters like the one I heard the other night when Martha Argerich and Nelson Goerner played two-piano arrangements of Rachmaninov and Ravel and a combination of explosive power and brilliant clarity that left the audience reeling.

Given how hard it is to pin down Argerich these days, I don’t know where else in the world you could hear her do this kind of repertory. It was a one-off and completely mesmerising – as were her partnerships earlier in the programme with Renaud and Gautier Capucon; as was the astonishing young pianist Martin Helmchen playing Bach the following morning in the local church; and as was Evgeny Kissin playing Liszt that night.

At Verbier you barely pause for breathe between one staggering performance the next; but I did get time to sit down with a bruised and bewildered Martin Engstroem yesterday and get his side of the story – which makes the small deceit of Kremer’s “illness” understandable.

“I didn’t know how to explain the situation to the audience”, he told me, “because I really don’t understand why he’s doing this. Gidon is a wonderful artist, I respect him greatly, he’s been playing here at Verbier for many years. But he’s a complicated person. Artists are”.