Media
The best way to improve an orchestra? Get rid of the bloke with the baton
September 16th, 2011
Tags: orchestra 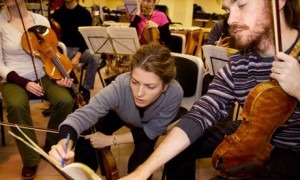 I have seen the future of orchestral music. And boy, is it good. Spira Mirabilis are an un-conducted ensemble drawn from some of Europe’s best young orchestral players, most of them under 30. In residence at the Aldeburgh festival this week, they’ll be playing two concerts, with just a single, short symphony in each: the fourth symphonies of Beethoven and Schubert. But don’t let the familiarity of the music fool you: Spira Mirabilis represent a transformative vision of what a symphony orchestra can be. They are a revelation, proof that musicians can not only survive but prosper when liberated from the variously benign or malevolent dictatorships created by the world’s conductors.

There are already famous examples of virtuoso ensembles who choose life without a maestro: the Orpheus Chamber Orchestra, the Australian Chamber Orchestra and the Freiburg Baroque Orchestra. But mostly, the bands who play without a conductor replace the stick-wielder with a musician who leads from the first violins – so they’re not as democratic as they seem.

With Spira Mirabilis, it’s different – and not just because they sit in a miraculous spiral (the geometrical form found in seashells and sunflowers that inspired their name). The common complaints in orchestras, especially British ones, is that there isn’t enough rehearsal time; no one is allowed to voice an opinion apart from the bloke (usually) on the podium; and there’s too much to do with too little energy. Well, Spira Mirabilis have the answer to all three problems.

I’ve just been watching the 34-strong band rehearse the Beethoven, and it was extraordinary. They spent three and a half hours working on the first movement; music that plays for about 10 minutes in performance. And every detail of phrasing, articulation, speed and loudness was argued over by every-one from the back desk of the second violins to the first oboe, before the group decided on a collective vision.

If that makes Spira Mirabilis sound like a European parliament meeting, a talking shop where everyone is allowed to speak and inertia is the result, I can only say that that’s not what happens. The players put the music first: they come up with their own coherent interpretation. They investigate their ideas to extremes, trying out the fastest, the slowest, the most expressive approaches. Even in rehearsal, the result is thrilling, because each note is new-minted, the result of a struggle to grapple with the true meaning of Beethoven’s score.

As violinist Lorenza Borrani, one of Spira’s founders, told me, each musician has to fight to convince the group why their vision is right; the players can only win their case through rigorous argument. Yet, as well as all these individual ideas, there’s a collective energy at work. Whatever their personal feelings, the players arrive at a scintillating result because of the closeness of their relationships.

Spira Mirabilis are proof that musical democracy works. Hearing them play Beethoven was like seeing an image through a telescope come magically into focus. Their example should be followed everywhere. Great orchestras, like the Berlin or Vienna Philharmonics, often describe what they’re doing as chamber music on a symphonic scale. This is even more true of Spira Mirabilis. On Wednesday, they play Schubert in Suffolk. Get there if you can.