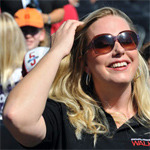 Richard Wagner’s great-granddaughter Katharina Wagner is taking on the purists at opera’s most exclusive festival – and trying to exorcise its Nazi past.

Wotan, father of the gods, has just kissed his daughter, Brünnhilde, to sleep and left her to in a protective ring of fire. Katharina Wagner raises her eyebrows as she smacks her lips around an ice-cream, and looks on in satisfaction at the sea of 20,000 people who have gathered on Bayreuth’s carnival ground to watch a live transmission of The Valkyrie on a huge screen. “I think we’ve pulled it off,” she says.

Dressed in jeans and polo shirt, the attire of the co-chief of Germany’s Bayreuth festival could hardly be in starker contrast to that of the high society event’s standard dress code. But then Wagner neither looks nor behaves as you might imagine the head of one of the world’s most talked-about cultural institutions to, or even the great-granddaughter of composer Richard Wagner.

On the so-called Green Hill, her half-sister and fellow festival head Eva Wagner-Pasquier has donned a ballgown to attend the live version of Tankred Dorst’s production, and the 2,000 opera-goers who spill out of the Festspielhaus following the six-hour marathon, for which they have paid an average of €200 (£163) a ticket, are dressed in the usual Bayreuth garb of dinner jackets, gowns, the odd dirndl, as well as more eccentric get-ups, such as a mermaid costume.

It is clear that Wagner feels more at home here at the public viewing – one of the innovations that has characterised her young tenure so far and with which she has taken on the powerful Bayreuth establishment – than on the hill, hobnobbing with the great and good. “The people are down to earth here. I feel at home,” says the 32-year-old in her characteristic deep, gravelly voice (she was once asked by a taxi driver if she did voice-overs for porn movies). “I hope very much that the public viewing will be seen as my contribution to the festival, as an attempt to make it less stuffy, and elite, more open and transparent.”

This is no mean goal. Bayreuth is one of the most conservative festivals in the world, for which you can wait 10 years to secure a ticket: this year, for the 54,000 tickets there were 408,000 applications from more than 80 countries. The festival is seen by legions of fans as a sacred shrine to Richard Wagner, who set it up to showcase his works 134 years ago. These Wagnerians are deeply divided over Katharina, who after a long family battle (but with the staunch backing of her father Wolfgang, who himself reigned on the Green Hill for 50 years) took over the helm last summer together with Eva, 33 years her senior. “The feeling of Wagnerians towards her oscillates between holy veneration and calling for a witch hunt,” says Die Welt’s cultural commentator, Lucas Wiegelmann.

This is the first time the sisters have been completely on their own, following the death of their father in March. Poignantly, his seat in the Festspielhaus, where he watched no fewer than 1,300 performances, has been cordoned off out of respect. “I feel Dad’s absence in every nook and cranny of Bayreuth,” says Katharina. “But he’s also constantly there with me, whispering in my ear, ‘You’re doing a good job, girl.'”

The sense that a new era has begun is palpable. At the free public viewing, locals – 70% of whom admitted in a recent survey they had never seen a Wagner opera – are invited to watch high culture while devouring sausages, beer and pretzels. There is also a kinder opera, now in its second year, in which a Wagner work – this year it was Tannhäuser – is condensed to a more digestible and child-friendly format.

The sisters have tried to shift the power away from the traditionalists by setting up a new team of “active festival patrons” to encourage more transparency and artistic freedom, and less bureaucracy. The move is risky, as the traditionalists, who make up the Society of the Friends of Bayreuth, control much of the festival’s funding.

“I don’t want Wagner just to be for people who have a lot of money,” says Katharina. “It should be for everyone. When I’m told I’m killing the myth due to my podcasts, live streams, or television transmissions, I’m really sorry, but the myth is the work itself. Nothing can destroy that. The myth is Richard. End of story.”

The festival has had a troubled history. Thanks to Hitler’s love of Wagner and his close friendship with then-director Winifred Wagner (the English-born Welsh wife of Siegfried, and Wolfgang’s mother), the festival enjoyed a fair amount of artistic independence under the Third Reich. It is also rumoured that Winifred and Hitler, whom she called Wolf, were lovers. So another of Katharina’s initiatives has been the setting up of an independent historical commission to investigate the unanswered questions about the festival’s Nazi connections.

“I, for one, am personally interested about the extent to which the family was involved [with the party] on an individual basis,” she says. “I want to find out more about my grandmother’s fascination for this man, which lasted right up until the end of her life. But was she his lover? I don’t know, I wasn’t in the bedroom.”

Katharina was prepared for this role from an early age. “At one point when I was about 20, my father asked me whether I could imagine taking on the job. I said yes. I could imagine it, but it wasn’t like I absolutely had to do it.” She studied theatre in Berlin, and staged her first opera, Die Meistersinger, at Bayreuth in 2007. The production was booed for some of its more outlandish features (statues of Beethoven and Mozart boasting erect plastic penises, for instance) by many of the die-hards – one even threw a cushion at her. But it convinced her father that Katharina was capable of assuming the role.

She says she will never get used to the Wagner fanatics, however, some of whom she finds “rather scary”. Some even ask for locks of her trademark blond mane. “When I brush my hair, the stray strands end up in the waste paper basket, just like anyone else’s,” she says, breaking into her chain smoker’s charming cackle.

Wagner vehemently dismisses reports about tension between her and Eva. “Regarding the festival, we think with one mind,” she says. The media-shy Eva, described as the “backstage queen” to Katharina’s “front of house lady”, has certainly had issues with the family, having been thrown out of the home by her father in the late 70s. But it’s never been clear that she had any resentment towards Katharina, who was not even born at the time. “We didn’t even know each other, so how can it be that we didn’t get on?” says Katharina.

It’s other family members Katharina is ready to show her frustration towards, such as brother Gottfried, who claimed earlier this year that he had been banned from going to his father’s funeral. (“Nonsense,” says Katharina. “I called him, I emailed him, all in good time.”) She is, she says, fed up with “those family members” who “cook up publicity just because they happen to have a book to sell.”

Turning up last weekend to introduce her pet project, the children’s opera, her long glittery nails and large diamante hoop earrings flashing in the sun, Katharina passionately outlines her mission to win a new generation of Wagner enthusiasts. “It’s our duty to the world of opera. We have to be actively recruiting new opera lovers as it’s no good if they have to wait for 10 years for tickets,” she says. “And after all, Richard was all for making the festival more accessible.”

After the one-hour production of Tannhäuser, the nine-to-15-year-old Booz siblings Olivia, Carolin, Marvin and Deborah, from Bayreuth, rave about the characters, particularly the punky skateboard-riding Venus. “It’s our first time at a Wagner opera,” says Deborah. “I’d thought it would be boring, but it was great fun.” They disappear to a tent to try on costumes, talk to the singers and experiment with smoke and foam machines.

At the entrance, a group of self-confessed hardcore fans who have dropped in to survey the opera for themselves deliver a damning verdict. “Patronising and belittling to Wagner,” says one. “Let the people have Wagner in its entirety or not at all.”

It’s at moments like these, says Katharina, that she feels like getting in her car and escaping the claustrophobic confines of Bayreuth – which has been described outside festival time as having half the number of inhabitants of New York’s main cemetery, but being twice as dead – to the openness and freedom of her beloved Berlin.

Tellingly, her favourite place during the five-week festival is a motorway service station cafe on the outskirts of Bayreuth, which overlooks the autobahn to Berlin – and where it is highly unlikely she will be discovered by a Wagner fan. “I love sitting here drinking a coffee,” she says, “and dreaming of escape.”