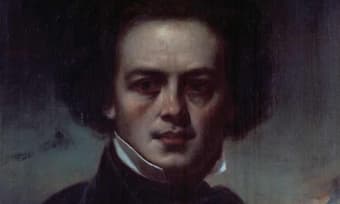 ‘What does anyone know about the mind!?’ … a portrait of Robert Schumann (1810-1856) by an unknown artist. Photograph: De Agostini/Getty Images

The Romantic composer died in an asylum in 1856, since when musicians, doctors – and even the Nazis – have sought to name the illness that brought his early death. It tells us as much as about the story of modern psychiatry as it does about the man and his music.

Of all the things, one of Robert and Clara Schumann’s grandchildren, Felix, ended up working as a door-to-door lingerie salesman in a New York suburb. On the morning of 25 October 1941, he was found slumped behind the wheel of his car, parked in a garage behind his house. Carbon monoxide poisoning. According to the New York Times, he had been “despondent because of poor health and financial reserves”. The death was recorded as a suicide. Full story.