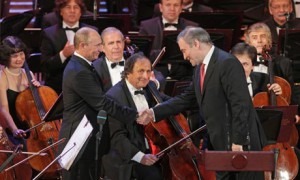 WHEN conductor Valery Gergiev added the International Tchaikovsky Competition to his portfolio of musical empires, he promised to clean it up and wrench it into the 21st century.

Perestroika was certainly needed. The Tchaikovsky, held in Russia every four years, has always been a titanic test for young performers from around the world who enter its four categories (violin, cello, voice and piano). Each must prepare reams of solo material and three concertos for a gladiatorial contest extended over three weeks and held in front of ferociously savvy Russian audiences in an atmosphere of unremitting tension.

“It’s like War and Peace, without the peace,” a Russian friend quips. And once the punters have picked their favourite the partisan frenzy in the Great Hall of the Moscow Conservatoire can be scarier than centre court at Wimbledon.

But in recent years the Tchaikovsky has been tarnished, with jury members blatantly voting for their own pupils.

“It became a contest between professors in the Moscow Conservatoire,” Gergiev says.

So he took half of it away from Moscow, dispatching the violinists and singers to St Petersburg, and swept away the biased teachers among the judges.

Instead, he invited the great stars of classical music. Anne-Sophie Mutter and Yuri Bashmet were on the violin jury; a half-dozen former winners, including Barry Douglas and Peter Donohoe, judged the pianists. The cello jury ranged from composer Krzysztof Penderecki to Clive Gillinson, boss of Carnegie Hall in New York. And you could have dream-cast several Verdi operas from the voice jury, led by Renata Scotto.

“When Valery asks, you don’t say no,” Douglas says.

Gergiev also imported a new management, new rules and an “incorruptible” voting system from the Tchaikovsky’s rival: the Van Cliburn Piano Competition in the US. He also persuaded the man himself – Van Cliburn, the lanky Texan pianist who won the first Tchaikovsky in 1958 at the age of 23 – to make his first return to the competition.

His press conference, held on the roof of one of Moscow’s swanky hotels, completely upstaged the Hollywood stars gathered for the Moscow Film Festival.

“Who is this old guy?” John Malkovich is reputed to have asked in amazement.

Gergiev’s unrefusable invitations also extended to the top of Russian society. Government ministers mingled with oligarchs during the final stages, where competitors were accompanied by the top three Russian orchestras. Vladimir Putin was at the opening gala.

It’s hard to imagine classical music creating such a stir in any country except Russia. But even in Moscow things are changing. The new Russians flaunting their wealth in indescribably expensive watering holes have little interest in high culture. Gergiev’s achievement was to make attendance at the Tchaikovsky seem socially essential, even to them.

He also turned the event into an internet phenonemon. Every note in every round was webcast: no small achievement when seven venues were used simultaneously in two cities 700km apart. What’s more, viewers could vote online or by phone for their favourites. The results of this poll were given almost as much prominence as the juries’ verdicts.

But it was the latter that caused the rows, or “polite discussions”, as Gergiev described them in the press conference he was forced to call to answer the press outcry about the piano jury’s decisions.

The Russian critics, and a faction of the audience, were upset by the elimination in early rounds of two Russian pianists: the inspired but inconsistent Eduard Kunz and Alexander Lubyantsev.

The critics even muttered about giving their own, alternative awards although, in the great independent tradition of the Russian press, they decided they should ask Gergiev for permission. Unsurprisingly, he said no. What riled these critics was the suspicion that the jury was eliminating Moscow Conservatoire-trained pianists in revenge for the favouritism shown to homegrown candidates in the bad old days.

That two of the five finalists were Russian was deemed irrelevant because they were the wrong sort. Both (including the winner, 20-year-old Daniil Trifonov) study in the West.

That wasn’t the only controversy. The new rules forbade juries from discussing competitors among themselves before voting (to stop one strong figure exerting undue influence) and stated that a first prize would definitely be awarded in each category. Yet the violin jury did the opposite. It conferred, then decided that no one was good enough to get a first prize.

Such decisions are always subjective. And you had to be in the Great Hall (now superbly restored to its tsarist marble glory) to feel the astonishing tension around the piano competition.

Feisty Korean Yeol Eum Son must have felt the pressure yet, to my ears, she gave the more exciting interpretation of the mandatory Tchaikovsky First Piano Concerto: a blistering reading that left me gasping. I would have given her gold, not silver.

The juries may not have got it all right, but they weren’t bent. The musicmaking, especially from pianists and cellists, was breathtaking.

Besides those already mentioned I would pick out Korean bass Jongmin Park (just 24, yet already with a voice like a cavern), his soprano compatriot Sun Young Seo, and brilliant if wayward 18-year-old Belorussian cellist, Ivan Karizna, as names to watch.

Whatever its defects, the Tchaikovsky is back: once again the most thrilling music competition on the planet.