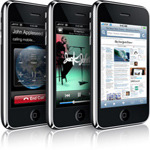 The Houston Symphony will be asking audience members Thursday to please turn on their cell phones.


You heard it right; turn ’em on. Or, at least, please turn on the smart phones.

After years of insisting that the audience shut down electronic devices before the conductor raises the baton, the symphony is encouraging its audience to stay logged on for the Houston Symphony’s first “Tweetcert.” Listeners with access to Twitter will be able to view tweet-size tidbits of information about Bernstein and Ravel as the orchestra performs the composers’ works.

“We are in the second decade of the 21st century, and we all have all of these sensory stimuli around us all the time,” said Houston Symphony assistant conductor Brett Mitchell, who will lead the orchestra. “Engaging one or two more of the senses, I think, is a fabulous way of interesting people who might not come to a concert on a regular basis. It might entice them to come.” The goal for the concert is to provide real-time information about the Bernstein’s Overture to Candide or Ravel’s Mother Goose Suite, for example, as the music unfolds. That way listeners unfamiliar with orchestra concerts will have some extra knowledge to help them enjoy the music, and symphony regulars can pick up something not covered in the printed programs, said Melissa Seuffert, assistant marketing manager who works with digital media and young audience engagement.

Mitchell wrote the Twitter notes and Seuffert turned them into 140-character tidbits. At the concert, Seuffert will be backstage with the musical scores, a computer and a helper. Roughly every minute, she will hit “send” and an update offering some insight about the upcoming passage of music will float over the Internet into the audience.

For the listeners of a certain age — and that would be the digital age — it will be like watching VH1-style delivery live.

“It’s like pop-up music,” Seuffert said. “Pop-up symphony.” Though the Miller concert is the Houston Symphony’s first attempt at using Twitter to update audiences, other symphonies have done similar experiments.

At Wolf Trap National Park for the Performing Arts in Virginia last summer, the National Symphony Orchestra used Twitter updates for a performance of Beethoven’s Symphony No. 6. The orchestra was among the first to put Twitter to use in the service of a classical concert, said conductor Emil de Cou.

Though there were some critics, the concert was a success in bringing out a younger audience and earning recognition for the orchestra, Cou said.

“It got a huge ovation,” Cou said.

The practice started in October 2008, when the orchestra premiered a composition by Rice University composer Karim Al-Zand. Though cell phones were to be turned off during the concert, the audience was encouraged to text their response to the new piece at intermission.

Next season, Lawyer said, the orchestra plans to expand the effort and take text-questions from the audience, some of which will be answered onstage after intermission.

Texting is part of the way the orchestra communicates with its audience, Lawyer said. In the communication age, the conversation has to be two-way or an orchestra runs the risk of turning into an unapproachable mass of black outfits on a stage.

Adding technology to classical music has its critics. Some complain that it distracts from the music. Others believe that music is communication tool enough.

There are limits to the role technology can play in a concert, Lawyer said. For example, cell phones are supposed to be off during the chamber orchestra’s concerts.

“Our language is still music,” Lawyer said. “If we go overboard in doing the technology, our language becomes technology. I do believe we have to do it purposefully.” The Houston Symphony has purposefully scheduled its experiment in the Tweetcert for outdoors, not in Jones Hall.

At Miller Outdoor Theatre, a small hand-held screen will be the least of the possible distractions in a setting where people often bring young children who squirm in their seats while others lounge on the hill above the theater, eating, drinking and listening.

“If you are distracted by a blue screen,” Mitchell said, “just wait for the slow movement to come and the MedEvac chopper to fly over head on the way to Memorial Hermann.”