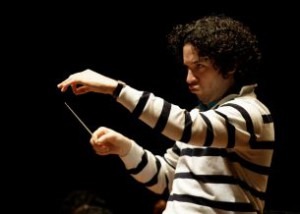 “Youth is hot and bold,” Shakespeare wrote. He might have also mentioned it’s highly marketable.

Increasingly, the message “youth sells” seems to be music to the ears of America’s symphony orchestras. And as orchestras grow ever more concerned about attracting new audiences, they’re increasingly looking to fresh-faced conductors to lead the way.

Traditionally, orchestral conductors have been valued for their experience and maturity. For this reason, in “conductor years,” 40 is still considered young. It’s not uncommon for maestros to hit their stride at a time of life when other people are retiring. Some have continued to work until they were carried out feet first.

But all that could be changing. The latest major orchestra to appoint a noticeably young conductor is the Philadelphia Orchestra. In October, the celebrated but financially challenged orchestra (newly emerged from a year of bankruptcy protection) welcomed the 37-year-old Yannick Nézet-Séguin as its new music director.

“The term ‘young conductor’ has never really been defined,” says Judith Kurnick, spokeswoman at the League of American Orchestras. “But ‘young’ seems to be getting younger. It has moved downward to around the age of 30.”

She continues: “So much of it has to do with our culture and our focus on youth. And what orchestras look for in a music director is a much broader job description than it was even a decade ago. There’s a need for someone who’s willing to try new things and have a place in the community, off the podium. Also, there’s no harm in being telegenic.”

In Houston, a clutch of younger conductors who have made guest appearances in recent years – including James Gaffigan (33) and Pablo Heras-Casado (34) – may be on the orchestra’s short list. (The Houston Symphony hopes to announce its new music director in May.)

In 2007, the New York Philharmonic Orchestra raised eyebrows in the classical-music world when it announced its next music director would be Alan Gilbert. Just 40 at the time of his appointment, he replaced the outgoing Lorin Maazel, who stepped down at the age of 79.

But the young conductor who has attracted the most attention is Gustavo Dudamel. The Venezuelan was appointed as music director of the Los Angeles Philharmonic Orchestra five years ago at the tender age of 29. Now that he’s firmly installed in LA, it’s apparent that the right young conductor can have a big impact on an orchestra and a community.

“Dudamel embodies the music he’s conducting,” says Gail Eichenthal, executive producer at KUSC radio and formerly the “voice of the L.A. Philharmonic” on the orchestra’s broadcasts. “He has a passion and charisma that you can’t define – but you know it when you hear it. Even the most jaded veteran players in the orchestra could see there was something here that was thrilling.”

As well, she notes that Dudamel has attracted new audiences to the orchestra, especially a younger demographic, and also members of the Hispanic community.

“At the free concert that kicked off his directorship, at the Hollywood Bowl, in 2009, I asked young people, ‘What brings you here today?’ They all said, ‘Gustavo.’ Most also said they had never been to a classical concert before.”

However, Eichenthal cautions against the idea that appointing a young conductor is a “magic pill” to solve all problems.

“An orchestra still has to make its programming attractive, fresh and adventurous. But Dudamel has definitely brought a surge of energy to the whole American orchestral scene, not just in Los Angeles.”

Pulitzer Prize-winning music critic Tim Page, who’s lived in L.A. since 2008, agrees that “the Dude” has been good for the LA Philharmonic.

“Is Dudamel the wisest old man in the classical music business?,” Page asks rhetorically. “No, he’s not. But he’s where he is for other reasons. He’s young and exciting, and orchestras respond to him. My hope is that he will grow and become a wise old sage – and there’s a good chance this will happen. I think L.A. is lucky to have him.”

However, Page also sees a downside to the appeal of youth. “Marketing is essential, but if it’s the only consideration, then the results will be junk. We’ve seen this kind of debasement going on in classical for some time.”

The appointment of young conductors to lead major orchestras certainly isn’t unprecedented. Leopold Stokowski was just 30 when he was named music director of the Philadelphia Orchestra, 100 years ago.

But in 2012, the motivation and context for such appointments has shifted. Orchestras have come to the realization that their future depends on updating their image.

For conductors today, youth has become an asset rather than a liability.