Media
The Surprising History of ‘We Shall Overcome’
August 7th, 2015
Tags: society 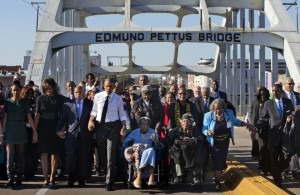 President Obama leads a group walking hand-in-hand, with many singing “We Shall Overcome,” as they cross the Edmund Pettus Bridge on March 7, 2015, commemorating Bloody Sunday. Former president George W. Bush, just out of view to the right of this shot, and his wife Laura were also in the first row of the march.
Credit: Jacquelyn Martin / AP

Guy Carawan, who died at 87 on May 2, is credited with turning the song from an obscure protest song into a civil-rights anthem.

It wasn’t a surprising choice. “We Shall Overcome” is a staple for civil-rights protests—and for that matter, for any kind of social-justice movement. The Library of Congress calls it “the most powerful song of the 20th century.” So it was a surprise to learn that not only is the identity of the person who made it into that anthem known, but he died only on May 2. Full story.