Media
Super Empathetic? It May Affect How You Listen to Music.
July 10th, 2019
Tags: research 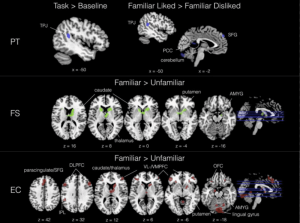 “The areas of the brain for reward and social awareness uniquely activate in people with higher empathy when they listen to music.”
( Science Daily/SMU/UCLA )

Music is, objectively, not a living thing — but new research out of Southern Methodist University and the University of California, Los Angeles, suggests that we don’t always treat it that way, and sometimes even think of it as another social being. “Neurophysiological Effects of Trait Empathy in Music Listening,” a paper by SMU musicologist Zachary Wallmark and UCLA neuroscientists Choi Deblieck and Marco Iacoboni that recently appeared in the journal Frontiers in Behavioral Neuroscience, examines the observed connections between empathy and the activity of listening to music.

“We all love music, and there are some musical theories that make the argument that the way we relate to music is like the way we relate to another social being,” said Iacoboni, explaining the motivation for such a study. The team actually did several studies related to music, but the one on empathy began with Wallmark asking 20 participants about the music they did and didn’t like. Full story.