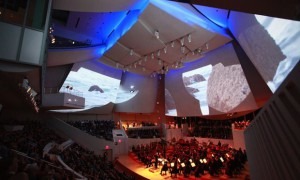 To enrich the visual appeal of symphony concerts, orchestras have experimented with a range of tactics: adding video screens to concert halls that show live close-ups of the conductor and soloist; ditching tuxedos in favor of more modern garb; or projecting video effects and silent films during a performance.

Some of these experiments may reach new converts but they also provoke an inevitable backlash: looks shouldn’t matter when assessing the musical excellence of a symphony orchestra, the detractors argue.

But a new study may provide some fresh evidence to those who believe that an orchestra performance is as much a visual experience as an auditory one. Dr. Chia-Jung Tsay and a research team at University College London last week published a study which found that when it comes to judging a performance, audiences are just as likely to focus on an orchestra’s stage presence as its musical prowess.

The researchers gave 1,062 volunteers, including professional musicians and novices, clips of two kinds of orchestras – one a world-class professional orchestra and the other a college-level or regional group. Some of the clips were silent videos; others were audio-only with no visuals.

Study participants were more likely to identify the professionals when shown video-only footage than when played audio clips: 64 percent identified the top-ranked orchestra from seeing silent video footage; but with audio alone, the success rate was 53 percent. (The pros included the Chicago Symphony, London Symphony and Berlin Philharmonic; the amateurs weren’t identified).

“This research suggests that the ultimate music ensemble astounds not its listeners but its viewers,” said Tsay in a press release. Last year, Tsay, an assistant professor in UCL’s Department of Management Science and Innovation, conducted a similar study involving competitions.

But just what are the visual cues that the survey participants picked up on? These included “group dynamics, such as physical synchrony, coordinated action/movement, cohesion, intention, energy, passion, expression, among others,” Tsay explained in an e-mail. Not cited were broader, extramusical factors like gender, race or perhaps clothing style.

In her synopsis, Tsay considered how this tendency may impact the makeup of major orchestras. She suggested that the practice of holding “blind” auditions behind a screen – commonplace among most major ensembles – has had a demonstrative effect on their overall sound.

“Since much of music is experienced live, and visual information appears to dominate judgment – it is likely that audiences may face a disconnect when they attend live performances of musicians who were chosen through blind auditions.”