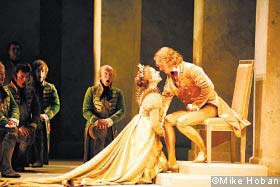 If pictorial reproduction can be traced to founding and stamping in Ancient Greece, textual reproduction to the printing presses of the Middle Ages, sound to the recording experiments of the late 19th century and the moving image to a few years later, then opera – that messy, mongrel art form – is finally having its moment.

Walter Benjamin’s influential 1936 essay “The Work of Art in the Age of Mechanical Reproduction” debated the consequences of mass reproduction in the wake of a great flourishing of film and photography, and his ideas held their relevance throughout the 20th century. However, although sound and video recordings of opera performances are nothing new, it is only in the past few years that technology has brought us something close to a true reproduction: high quality sound and visuals and, crucially, the potential for live relay.

The Metropolitan Opera was the first to forge the way when, in 2006, the company began to broadcast live screenings of New York matinee performances (a timing that suits European audiences well but makes reciprocal arrangements more difficult) and it has proved lucrative. Net profits for this season of HD cinema screenings were expected to be between $10m and $12m. This has given the company a strong global presence, but UK and European opera houses and concert halls have begun to address this imbalance.

The Berlin Philharmonic orchestra’s Digital Concert Hall is screening 30 live performances this year and Royal Opera House’s 2011-2012 season includes five live cinema relays. Meanwhile, Glyndebourne has entered into a partnership with Picturehouse Entertainment, which will screen performances in more than 50 cinemas across the UK, and renewed its partnership with the Guardian newspaper to live-stream opera on its website.

Since its founding in 1934, Glyndebourne has embraced new technology and the wide reach that it has offered; the festival’s inaugural production, Le nozze di Figaro, was recorded by The Gramophone Company, and two years later BBC radio broadcast a live recording of Don Giovanni from the opera house. In 2007 Glyndebourne became the first UK opera company to screen into cinemas, and it has continued to develop its digital presence, responding to a wide range of incentives.

“I think the driving forces have changed,” says David Pickard, Glyndebourne’s general director. “Ten years ago it was very much the intention that we would film as much as we could, on the basis that if we had the rights to that material, there would at some point in the future be a secondary stream of income – and indeed that’s still the case,” he explains. “But the technological world is so different and now, equally important, there is this fantastic way of simply getting our work out to a broad audience.”

Previously, opera companies would sign up to TV broadcasts of their productions as and when producers showed interest, and in doing so they would relinquish their rights to that material. Glyndebourne productions cost between £150,000 and £200,000 to film and these costs are recouped through TV broadcasts (last year’s production of Handel’s Rinaldo, for example, was screened on BBC4 last month) and ticketed screenings. Having made the recording, Glyndebourne can then use clips and trailers as part of its promotional material, and show whole films as part of its touring programmes.

The Metropolitan model shows that opera screenings can make good business sense, but what about the artistic implications? Melly Still, who is directing this season’s curtain raiser, a new production of Janacek’s The Cunning Little Vixen, admits she was sceptical of the trend at first but says “the results are always incredibly positive and I think they really generate the live art experience”. She learned of Glyndebourne’s summer screening plans having already conceived of the overall vision for her production, but I ask whether she will adapt her approach to stage preparation and rehearsals, knowing the results will be scrutinised by zoom lenses.

“I haven’t thought about it,” she replies. “In terms of scenery, we’re not trying to evoke realism or naturalism. There’s a kind of poetic truth to it but we’re not trying to say ‘this is a forest’. And in terms of facial expressions, I always demand and insist on absolute truth in character and relationships, so if that helps in terms of the screen, then great.”

Whatever the attitude of opera directors, filmed opera productions do place greater demands on the performers: not only do they have to sing, and often dance, to an extremely high standard but their acting has to withstand the hard gaze of cameras. It can only make the audience experience more interesting, but it would be dangerous if film directors (more egos in an already potent mix) begin to dictate what happens on stage.

Laurent Pelly, who is directing a new double-bill production of Ravel’s L’heure espagnole and L’enfant et les sortilèges at Glyndebourne this summer, thinks this unlikely, but he acknowledges that film directors have the power to make or break an opera recording.

“Film and opera directing are completely different skills and professions, and it’s a question of finding a way for the two to coincide and work together,” he says. “The most important thing is the spirit of the production, and the positioning of the cameras is very important. A badly positioned camera can destroy the whole thing.”

The showing of a filmed opera can seal its critical fate, and I ask Pelly if an awareness of this longevity adds to the pressure of his work. “Not really, it’s just a risk of the profession,” he replies. “To have great success on DVD is good but something that’s less successful will be forgotten about, it will disappear. The DVD will live on, it will remain on the shelf, but nobody will buy it.”

The flip side, of course, is the growing archive of stage work, and one can only wonder at the thousands of productions that have been lost to history – their only legacy a handful of dusty props or the odd makeshift recording.

Benjamin argued that the “aura” of the original work of art declines as a result of mass reproduction but wrote of the freedom that comes with its destruction. There will be some who lament the loss of opera’s “mystique” – buffs who boast of risking bankruptcy to watch Domingo perform live, or about how marvellous it was to witness Sutherland’s Lucia that mild May evening back in ’73 – but the plus sides of live screenings far outweigh that cost.

“I think all opera companies suffer because of a certain level of misunderstanding about what we present, because a lot of people don’t know what we do,” says Pickard. “And if this is the start of a greater understanding, and therefore a greater interest, which will lead to more people attending live performances, then that’s good for everyone.”

In 1923 the conductor Sir Thomas Beecham warned that concert halls would soon be left empty “if the wireless authorities are allowed to continue their devilish work”. Yet there’s still no sign of that happening. Despite all the recording innovations of the last 100 years, people are still drawn to the actual event: the atmosphere, the sense of occasion, the close proximity of the performers – and the risk of it all going wrong.