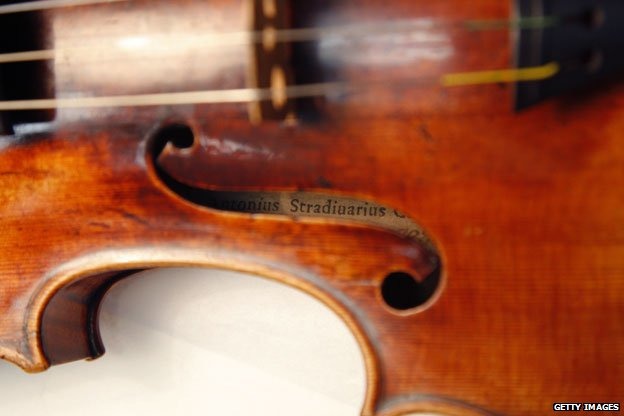 Switzerland is home to some of the best violin makers in the world. But how do they know which tree will make a top quality violin? A wander through the forest with a master tree picker gives an idea of the enormous experience and instinct required.

Just any tree will not do when combing a forest in Switzerland for the perfect musical wood – its age, the weather and even the position of the moon help to craft the warmest, fullest notes.

Lorenzo Pellegrini shook his head and walked away, knee-deep in snow.

He was not going to waste his time on that tree. Too many branches.

That’s how violin trees should grow.

“Up in these mountains, they grow so slowly sometimes they stop growing altogether. They just gather strength. There are trees up here that are a thousand years old,” he says.

His blue eyes are wide with wonderment. “Can you believe that?”

Pellegrini has been working the forest since he was nine.

Growing up in Italy’s Abruzzo mountains, he and his family would go deep into the woods each year, hours and hours from the nearest village, build a cabin to live in and stay there for eight months, cutting down trees, chopping up logs.

“I used to give my leftover polenta to the wolves,” he says.

When he was 30 he discovered the Risoud Forest and never wanted to leave.

Now 83, he still climbs trees like a squirrel, and tends the forest as if it were his garden – weeding out the beech trees that would smother his precious spruces.

“For the trees to grow slowly and regularly, you have to let them grow close together like the hair on your head,” he says.

“And there should not be too much water. The tree’s heart should stay dry. That gives the best wood. Solid. Enormous resonance,” he adds.

Pellegrini “gardens” the forest, as he puts it. But he gardens for people who will not be born for hundreds of years. So that there will be fine resonance spruce in the 24th Century.

That day comes at the end of autumn when the sap has sunk back into the ground. When the moon is lowest on the horizon, and furthest from the Earth.

Because, apparently, the gravitational pull of the moon does not only tug the waters of the sea and make the tides, it tugs up the sap.

On that day, the tree is as dry as it can be. A ceremony is organised with the other foresters. It is usually the youngest who has the honour of felling it.

Driving down to Le Brassus, a little mountain town near the forest that houses many of Switzerland’s most prestigious watchmakers, Jean-Michel Capt points to a mountain shrouded in cloud.

“They say that when you can see that peak, it is going to rain,” he says and pauses, letting us voice a little enthusiasm.

“And when you cannot, it is raining already.”

Capt is a craftsman and inventor who uses the resonance wood Pellegrini finds to make fine guitars.

In his workshop he shows me a strip of tonewood from a tree at least 350 years old.

Its grain, its rings, are dead straight and close together.

Put your finger on one ring – that is the British Army going over the top at Ypres.

On another, that is Louis XIV building Versailles.

This one takes you right back to the Pilgrim Fathers.

To demonstrate the wood’s acoustic qualities, he takes out a little musical box. He winds it up and it tinkles.

He places the tinkling box on that strip of wood and the tune suddenly fills the room. Not only much, much louder but warm and full.

Later we walk through the village to meet one of the many musicians of the Risoud Forest.

By the side of a wood-burning fire, by a table he made from a giant spruce, David Guignard takes out his cello and plays a bit of Bach – no pun intended.

Around here you would not be surprised to learn that people wear paper shirts and grate wood shavings on their spaghetti.

“My father was a forest warden and my grandfather built a cabin for us in the woods,” he recollects.

“So the best moments of my childhood were in the forest. I was happy to live at the foot of those trees.”

Guignard’s music teacher taught him that wood is never quite dead.

It is always reacting to changes in temperature and humidity, always evolving.

I listen to the crackle of the fire and the sound of cello strings making the wood sing.

And think that I will never quite hear this music in the same way again.

Because around here, when you hear an instrument like this, you think of the snow and the wind and the cuckoos and the bees in those tall violin trees.