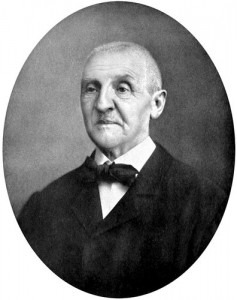 J. Löwy/Courtesy of the Cleveland Orchestra

POSTERITY has not always treated Anton Bruckner kindly. The popular image of this composer as an unwitting visionary — “half genius, half klutz,” as the conductor Hans von Bülow once said — developed early on. During Bruckner’s lifetime conservative critics recoiled from his music. Eduard Hanslick called him the “gentlest and most peaceable of men who becomes an anarchist during the act of composition.”

These dismissals were vigorously countered at the time by critics like Hugo Wolf and, a generation later, by music theorists like Ernst Kurth and August Halm, who argued that the line of musical mastery stemming from Bach and Beethoven found its rightful culmination in symphonies by Bruckner (1824-96). And in Nazi Germany, Bruckner was manipulatively promoted as a herald of the new Reich.

Through it all Bruckner has retained a secure place in the symphonic repertory. And today many experience a combination of spiritual depth and intellectual intensity in this music that uncannily suits our postmodern condition, a sensibility reflected in the Cleveland Orchestra’s contribution to the Lincoln Center Festival: Bruckner: (R)evolution, with Franz Welser-Möst conducting four concerts mingling symphonies of Bruckner with music of John Adams, beginning on Wednesday at Avery Fisher Hall.

Still, particularly in the English-speaking world, Bruckner’s symphonies continue to live under the shadow of the Bruckner Problem. This term refers to the confusion that has arisen around competing claims of the numerous versions and editions of his works, full of complexities stemming from Bruckner’s intricate patterns of composition, revision and publication.

Since the 1960s the conventional solution has been to accept as authentic only “original versions” of Bruckner symphonies, preserved in unpublished manuscripts. In contrast, the versions published during Bruckner’s lifetime are seen as provisional editions prepared by well-meaning but misguided friends and students — notably, the conductors Ferdinand Löwe and Franz Schalk — that distort Bruckner’s true intentions. Over time those editions have been eclipsed by “urtext” versions that take no account of the scores published in Bruckner’s time.

The desire for good new editions of Bruckner’s works is certainly justified. Not all of the early published versions meet modern standards of textual accuracy or authenticity, but this hardly justifies condemning them all as bowdlerizations. Over the last decade or so it has become clear that a number of these scores contain revisions that Bruckner made after rehearsals and performances, and thus should have much to say to contemporary performers interested in historically informed approaches to performance.

The belief that the early published editions are insuperably corrupt originated in the Third Reich. This development was led by the musicologist Robert Haas, who, from 1932 to 1945, directed the first edition of Bruckner’s collected works. Emphasizing Bruckner’s supposed victimization by manipulative editors, Haas presented his edition as the reclaiming of Bruckner’s pure original texts, purged of alien elements, for “Greater Germany.” Some of Haas’s editorial work stands up to contemporary standards of rigor and objectivity, but during the late 1930s his editing became more adventurous. At times he combined music from incompatible sources, made arbitrary decisions about tempo markings and, in at least two instances, recomposed brief passages. Other aspects of his project, especially his zeal to consign previous editions to oblivion, were shaped more by reactionary ideology, politics and careerism than by scholarly justification.

After the war Haas’s basic editorial approach, though not his ideological agenda, was continued by his successor, Leopold Nowak. In the postwar era the English-speaking world embraced the premise that the versions published by Haas and, to a lesser extent, Nowak are the true Bruckner, and that earlier editions “should be simply repudiated,” as the British critic Deryck Cooke wrote in his influential 1969 essay “The Bruckner Problem Simplified.”

As a result many English-speaking Bruckner lovers have become fixated on questions about versions of the symphonies, though the differences among them are not always striking. (An exception, the early-1887 version of the Eighth Symphony that Mr. Welser-Möst conducts on Saturday in the Nowak edition, is distinctly different from the familiar 1890 version.) Still, Haas’s position, and even echoes of his crusading dogma, are commonly adopted by commentators no doubt unaware of its ideological baggage.

It was not always so. The radical thinking about Bruckner versions that emerged in Germany in the 1930s was relatively slow to gain a foothold in the English-speaking world. In the 1930s and ’40s most serious writing in English about Bruckner came from Germans and Austrians driven from the Continent by Nazism. They could see all too vividly the political agenda and the scholarly fault lines of the revolution in the editing of Bruckner’s work.

The Vienna-born musicologist Joseph Braunstein, who lent his distinctive voice to the New York classical music scene for decades until his death at 104 in 1996, refused to accept the claim that only the “original versions” as published by Haas represented Bruckner’s authentic texts. He also cautioned against accepting myths about Bruckner versions “created and often circulated by people who, ignorant of the complexity of the problem and the related facts,” offered “no proofs to substantiate the charges.”

Another Austrian émigré, Alfred Mathis-Rosenzweig, argued that Haas’s Bruckner edition “had nothing to do with scholarship” but “revealed itself simply as a cunning trick of National Socialist propaganda.” Though this is a crude oversimplification, Mathis-Rosenzweig was justified in emphasizing that Haas’s edition was motivated in part by the desire to pry the copyright of the Bruckner symphonies away from Universal Edition, a Viennese company long despised by the Nazis.

The Austrian musicologist and composer Egon Wellesz, who had been a student of both Arnold Schoenberg and Guido Adler (himself a student of Bruckner) but was compelled to emigrate after the Anschluss, proved more sophisticated in his skepticism.

His article “Anton Bruckner and the Process of Musical Creation,” published in 1938, considered the questions raised by Bruckner’s revisions with the critical sense of a good scholar and the musical sensibility of a fellow composer. He argued — presciently, we now see — that the editions printed during Bruckner’s lifetime did not falsify his intentions but embodied a different, later phase of the creative process. So Wellesz regarded the new versions published by Haas not as restorations of authentic versions that had been suppressed but as early versions set aside by Bruckner as he tried to find the most effective “concrete expression” of his musical ideas.

Attitudes soon began to shift. In a 1942 essay, “Anton Bruckner: Simpleton or Mystic?,” the British critic Geoffrey Sharp adopted Haas’s belief that Bruckner’s apparent personal naïveté was the key to understanding the textual situation. He airily proposed that Bruckner had become “the dupe” of editors driven by “an all-consuming and very distorted Wagnerian perspective.”

“Quite probably,” he added, “Bruckner himself was no more than half convinced of the wisdom of this, but unfortunately where he only doubted, he acquiesced.”

This attitude came to dominate British and, in turn, American thinking about Bruckner. The emerging consensus was driven not by scholarship but by journalism and criticism. Cooke’s advocacy, including numerous Bruckner reviews in Gramophone magazine, had great impact. So did Robert Simpson’s influential book “The Essence of Bruckner” (1967), which, though quite perceptive musically, was often hampered by an easy acceptance of clichés about the composer.

New research that could have offered competing views was hindered by lack of access to crucial sources that were housed in Austrian archives well into the 1970s. An additional factor was the loss of living historical memory of prewar Vienna. Many of those who first contested Haas’s claims — including Wellesz, Mathis-Rosenzweig and Braunstein — were Jewish expatriates who had been part of Viennese musical life from the first decades of the 20th century and could draw on direct knowledge of the circumstances involved as well as the people: Haas and even Löwe and Schalk.

The sea change in English-speaking opinion about the Bruckner Problem is clearly illustrated by comparing the article about Bruckner in the first version of the book “The Symphony,” published in 1949, with that in the enlarged second version, from 1966. In 1949 the veteran British critic Richard Capell took a rather skeptical stance toward the claims of the “original versions” and cautioned that the revised versions were “the versions performed in the composer’s lifetime, presumably with his acceptance.” He recognized that while it is “clear enough” that Haas’s editions convey “Bruckner’s original thoughts,” the scores Haas wanted to expunge were often musically “more effective.”

Capell stated quite reasonably — and, we know now, with considerable justification — that “for all anyone knows, the differences between the manuscripts and these publications represent modifications sanctioned by Bruckner.” And he acknowledged that “Hitlerian politics entered into the propagation” of Haas’s edition.

Things look very different in the 1966 edition of the book. Here Cooke introduced the well-known term: “the vexatious ‘Bruckner problem’ — the confusion over the various versions which exist of most of his symphonies.” And setting aside Capell’s cautious approach, Cooke indulged in reckless speculation: “Unluckily, in his extreme humility he let himself be persuaded by clever colleagues and pupils” that the resistance of the concert-going public “might be overcome if he made extensive cuts in the form and changes in the orchestration” of his symphonies.

As new research undercuts old assumptions about the facts of the Bruckner Problem, established ways of thinking look increasingly like an elaborate mythology with some basis in reality as well as troubling ideological biases and historical blind spots. In discussing the brass chorale in the middle of the first movement of the Fourth Symphony, for example, Simpson, in 1967 imagined that Bruckner “must surely have been appalled, in his helpless way, at the ‘improvements’ ” found in the score published in 1890. Simpson reviled the addition of “triplets rippling prettily up and down in the flutes and oboes” and “pulsating harmonies” in the horn, sternly concluding that “Bruckner cannot have committed such a crime.”

In fact Bruckner did commit this “crime.” Study of the manuscript score used in the printing process reveals that the new wind parts were written by Bruckner himself during his final revisions before publication. Cooke and Simpson had great and deserved successes in other areas, but as Dermot Gault says in his important 2011 book “The New Bruckner,” “we cannot rely on anything Deryck Cooke or Robert Simpson has to say on the subject of Bruckner versions or editions.”

Scholars are steadily coming to understand the entire matter in ways that account for the history of Bruckner editing and that accommodate the complex array of musical sources now available. Not only are these efforts important in their own right, but as they continue to make their way into the mainstream, they offer the hope that music lovers will be able to appreciate Bruckner’s symphonies more clearly, free from the suspect traditions of thought that have long constrained perceptions of these splendid musical works.