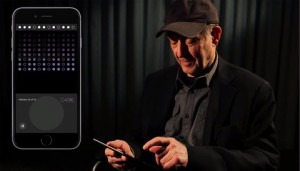 Forget “Angry Birds,” or “2048.” The latest star of a maddeningly addictive iPhone game is the composer Steve Reich.

In his piece, one performer claps a fixed basic pattern. A second performer begins by clapping in unison, but then starts clapping the pattern one beat off, and then another beat off, and keeps shifting until the patterns get back into sync and both clappers are in unison again. Full story.