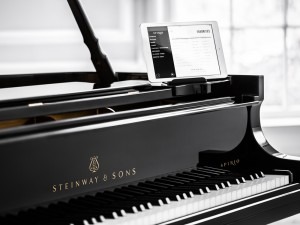 The black and white keys move so fast it’s hard to tell if Jenny Lin is even touching them. Lin, a classical pianist known for virtuosic speed, is sitting at a grand piano in Steinway’s New York offices, as the rest of the room listens intently, focused on the keyboard.

No, she’s definitely not touching the keys. Not this time. Minutes earlier, Lin played a hyper-speed arrangement of George Gershwin’s “I’ve Got Rhythm.” The same song is playing now, except this time Lin hands are on her lap. It’s uncanny, really: The exact same keys are pressed, the exact same trills are heard, the same dynamics are present. It’s a little magical—or “almost scary” as Lin puts it—as though you’re witnessing a prodigious ghost mimic her every move. Full story.