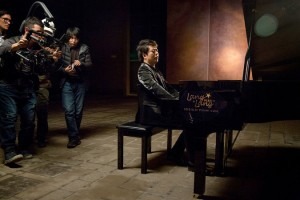 The pianist Lang Lang played a Steinway-designed piano during the filming of a music video in Beijing last February. Steinway has recruited celebrities like Mr. Lang for endorsements, which carry weight in the Chinese market. Credit: Adam Dean for The New York Times

Dozens of girls in tiaras and boys in tuxedos who dreamed of becoming China’s next musical sensation stared at the beast onstage. At nine feet long and nearly 1,000 pounds, with a steely black sheen and a price of more than $200,000, the Steinway & Sons D-274 concert grand piano seemed designed to intimidate.

There were whispers that the piano had come from far away, in Germany; that it could kill you in an instant if it rolled off the stage; that it had the power to turn even the sloppiest of scales into material primed for Carnegie Hall.

“It’s flawless, exquisite, with a special sound,” said Li Wei, the mother of an 11-year-old boy who had come to the theater to take part in the final round of the Steinway & Sons International Youth Piano Competition in China last winter. Full story.