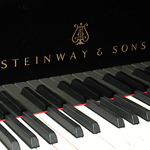 Steinway & Sons announced the launch of its new Steinway & Sons record label. The first release on this label, Bach On A Steinway, debuted last week at #3 on the Billboard Traditional Classical Album Chart.


Bach On A Steinway features keyboard masterworks by J. S. Bach as performed by virtuoso pianist Jeffrey Biegel, whose extensive embellishments and ornaments in a Baroque style give the recording a unique flavor. The album was produced by 15-time Grammy® winner Steven Epstein.

“Biegel is a sensitive and imaginative interpreter who brings this music to life,” writes Jed Distler of ClassicsToday.com. “This auspicious and superbly engineered debut bodes well for the success of this new label.”

Until corrective surgery at the age of 3, Jeffrey Biegel was unable to hear or speak. The “reverse Beethoven” phenomenon can explain Mr. Biegel’s life in music, having heard only vibrations in his formative years. His electrifying technique and mesmerizing touch have garnered Mr. Biegel much critical acclaim, including high praise from Leonard Bernstein – who called him “a splendid musician and a brilliant performer.”

The Steinway & Sons label will highlight stars from Steinway’s Concert & Artist program performing on exceptional Steinway grand pianos. Each of the planned four releases per year will feature a repertoire with broad appeal.

“The opportunity to bring the talents of Steinway Artists to the public through new recordings, impeccably produced and engineered, has always been an exciting concept for us at Steinway & Sons,” said Ron Losby, President, Steinway & Sons – Americas. “We are thrilled with the early success of this new venture.”

Recordings on the Steinway & Sons label are produced by ArkivMusic, LLC, a subsidiary of Steinway Musical Instruments, Inc., and can be purchased at ArkivMusic.com, Amazon.com, iTunes and other fine music retailers. Naxos of America is the exclusive wholesale distributor for the label.