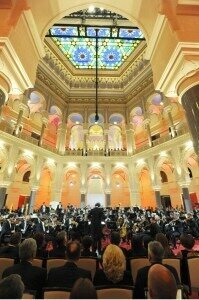 What Makes the Vienna Philharmonic So Distinctive

How different do great orchestras really sound from one another in the 21st century?

If you closed your eyes and opened your ears for a blind, Pepsi-challenge-type sound test, could you really identify who was playing — given the high level of musicianship at top ensembles, the same core repertoire and the influence of a cadre of jet-setting conductors who shape orchestras all over the world?

Ask musicians about this, and many will lament that a kind of homogeneity has crept into orchestral playing, and that the idiosyncrasies that once distinguished ensembles have faded. They will often exempt their own orchestras from this critique and then point to a handful of others that retain distinctive, recognizable styles. Those shortlists may vary, but one orchestra is almost always mentioned: the Vienna Philharmonic.

The “Vienna sound” has been the subject of reams of music criticism, academic research, acoustical experiments and more than a little debate. Not everyone agrees on precisely what it is — it is sometimes described as plush, warm and rich or sumptuous — but many listeners say that they know it when they hear it. The “specific sound” of the Vienna Philharmonic was cited this year when it won the $1 million Birgit Nilsson Prize, the largest in the classical music world. And when it won this year’s Herbert von Karajan Prize, the orchestra was praised for managing “to preserve its unique sound like no other.”

So the Vienna Philharmonic, which is now performing at the Salzburg Festival, seemed like an ideal candidate to inaugurate an occasional series exploring how orchestras retain distinctive sounds. Members of the Philharmonic sat down with reporters and videographers from The New York Times this year to discuss, and demonstrate, how a combination of playing traditions and a preference for atypical instruments rarely heard outside of Austria — they play Viennese horns, for instance, instead of the more commonly used French horns — shape their sound.

“It’s their obstinacy that has kept them so different, sound-wise, from the other orchestras of the world,” Zubin Mehta, who first conducted the Philharmonic in 1961, said in an interview earlier this year as he took a break from a rehearsal with the musicians at Carnegie Hall for the Vienna: City of Dreams festival. “The oboes, the clarinets, the horns, the trumpets, the timpani are still the same type of instruments that their forefathers used.”

Horn players in the rest of the world consider the Viennese horns treacherous, prone to “cracking” notes. The horn used in most orchestras is a double horn, tuned in F and B flat, while the Viennese horn is in F only. Wolfgang Vladar, a Philharmonic horn player who grew up listening to the orchestra (“I fell asleep during the Bruckner Fourth when I was 8 years old,” he recalled), said that the group was now using newer Viennese horns that were easier to play.

“It got easier, because the instrument makers got much better,” Mr. Vladar said. “Now you can easily get instruments where you can play every note clearly. When I started with the horn, it was impossible. You couldn’t get an instrument where every note was perfect.”

Despite its difficulty, the Viennese horn remains in favor, Mr. Vladar said, because it produces a loud, brassy sound at a volume that does not overwhelm the orchestra, unlike double horns.

“The main thing is that it blends better with the rest of the orchestra, especially with the winds, because of how it’s built,” he said. “Its brassy, fortissimo sound is reached much earlier than on the double horns. It’s really difficult for our horns to destroy the rest of the orchestra, so you just can hear horns. You will always be able to hear the other instruments as well.”

Viennese oboes are also different from those played in the rest of the world. When Clemens Horak, an oboe player with the Philharmonic, sat down and compared his oboe with the one used by Stuart Breczinski, a New York oboist who plays in the Ensemble ACJW, both men agreed that it would be difficult for them to switch instruments and play well.

Mr. Horak said that it was difficult to put the difference into words. “I think the main difference is when you listen to a Viennese orchestra, you will recognize that Viennese oboes make a little bit less vibrato,” or wavering of pitch, he said. “That’s a specialty in Vienna.”

Of course, it is not only the Philharmonic’s hardware that is unique. Its software may be even more crucial: the way singular playing traditions have been passed down through generations of players, many of whom studied at the same conservatories with the same teachers.

The clearest example may be the Philharmonic’s waltzes, which people all over the world have nursed hangovers to while watching its annual New Year’s concerts on television.

Mr. Mehta said that he could only “probably” recognize the orchestra blindfolded — unless it was playing a waltz, in which case his odds would improve greatly.

“If I could hear on the radio any waltz played ever, I would know immediately that, first of all, it’s an Austrian orchestra, and most probably the Vienna Philharmonic,” said Mr. Mehta, who will conduct its next New Year’s concert. “It’s not only the sound. It is the relaxed rhythm, it is the organized sloppiness. And that’s not a critique. That’s something that other people can’t do.”

To demonstrate the Philharmonic’s way with a waltz, Rainer Honeck, a concertmaster who has played with the orchestra for 33 years, played an excerpt from Joseph Lanner’s “Steyrische Tänze.” First, he played it in strict 3/4 time, as written. Then he played it in the Viennese style, achieving the trademark lilt by rushing the second beat a tad and hesitating before the third. “This is a very good example of playing not 1-2-3, but 1-2 … 3,” he said.

“The thing is it’s not always the same,” he explained. “That’s the secret. Every piece is different. It comes from tradition, from feelings.”

That slight uncertainty, and unpredictability, can create a pleasing tension for the listener, who, consciously or not, cannot anticipate quite when the next beat will come. “Sometimes the musicians also don’t know when it should come,” Mr. Honeck said. “It depends very much on the conductor, what he wants to express. And sometimes we are not sure.”

So how recognizable are the orchestra’s unusual instruments and its unique playing style to listeners?

It turns out there was an academic study, complete with a blind listening test, over a decade ago. About a thousand people, including musicians and music lovers, were asked to listen to very brief recorded excerpts from famous pieces played by the Vienna Philharmonic and then by either the Berlin or New York Philharmonics, to see if they could identify a specific Viennese sound. The study found that there was indeed a distinct Vienna sound, said Matthias Bertsch, a professor at the University of Music and Performing Arts in Vienna who conducted the study.

But there were some surprises along the way.

Dr. Bertsch said in an interview that listeners generally found it easier to identify long excerpts than short ones, which he said suggested that the Viennese style of playing and interpretation was more important to shaping its overall sound than the unusual instruments used. At least one listener, a Turkish music student, correctly identified which excerpt was played by the Vienna Philharmonic in all 21 head-to-head matchups, he said.

That Bernstein confused listeners points to another distinguishing characteristic of the Vienna Philharmonic: It is an independent, self-governing group, drawn from the players of the Vienna State Opera Orchestra, with no music director or principal conductor.

As a practical matter, that means not only that the players choose who will conduct them, but also that no one person overly influences their sound. Claudio Abbado, who often conducted them, once likened the spontaneity of their ensemble playing to chamber music, and said, “I don’t conduct them; I make music together with them.”

That the players of the Philharmonic have day jobs — or, more precisely, night jobs — in the pit of the Vienna State Opera influences their sound, too, said Clemens Hellsberg, a violinist who is the ensemble’s president.

“I would say it has an enormous impact that we are serving as the orchestra of the Vienna State Opera as well, which means that we are always confronted with the most natural instrument, and that’s the human voice,” he said. “That forces you also, in a way, to breathe with the singers. And to articulate, to phrase like the human voice does.”

Hewing too closely to tradition, of course, has its downsides. The Philharmonic did not admit women as full members until 1997, after years of protests. Women are still thin in its ranks. And the flip side of a long local tradition is a lack of diversity.

And in recent years the orchestra has taken steps to acknowledge the complicity of an earlier generation of its players with the Nazis, opening its archives, honoring those killed or wounded through its actions or inactions and, recently, tracking down the owners of a looted painting that had been given to the Philharmonic by a Nazi officer.

“We have now a history of 172 years,” Mr. Hellsberg said. “If we say, and we are proud to say, that we were the ones who created Brahms’s Second and Third and Mahler’s Ninth — ‘we,’ yes? — at the same time it would be impossible to say that in the Nazi period, that was not ‘we,’ that was those other guys.”

The orchestra remains proud of its sound, its traditions and its history, which dates back to 1842, when it was founded by the conductor Otto Nicolai. But it is aware of the risks of becoming hidebound.

“We have lots of discussion of how to retain this sound,” Mr. Hellsberg said. “It must be clear. But it changes. If our orchestra would sound like the days of Otto Nicolai, then it would no more exist.”