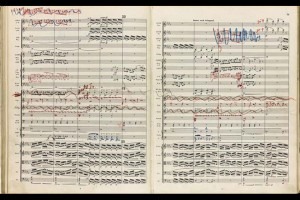 LONDON.- On 8th June 2011, as part of its Music, Continental and Russian Books and Manuscripts sale, Sotheby’s London will sell Gustav Mahler’s newly discovered personal copy of the first edition of the Third Symphony. Coming to the market for the first time, the full 1902 score of this seminal work contains the composer’s extensive alterations and performance markings, vividly amended in coloured ink, crayons and pencil. It is estimated at £100,000 – £150,000.

Sotheby’s Worldwide Head of Books and Manuscripts Stephen Roe said: “This is a magnificent new source for Mahler’s Third. It is a spectacular and beautiful score revealing the passion of Mahler’s creation and the exuberance of his musical thinking.”

The score itself is a very rare edition (by Weinberger of Vienna), published shortly after the first complete performance, conducted by Mahler in June 1902. The composer’s corrections were made in the light of directing the first few performances and constitute his full-scale revision of the orchestration of the symphony. Rich with successive layers of reworking, some 60% of the score’s pages contain Mahler’s autograph notes and amendments.

Many pages of the score are visually striking. Mahler wrote new music directly onto the staves and margins, mainly in red ink, but also frequently in brown and blue crayon – the various colours revealing successive stages of revision. It is not only a wonderfully textual record of the workings of the composer’s mind and his quest for perfection, but a work of art in its own right. In a substantial passage of over 20 bars, Mahler transforms the pages with new parts for oboes and clarinets in red ink, subsequently deleting these new parts in blue crayon with others for trumpets and timpani in red ink and blue crayon, then deleting entire staves for percussion in brown crayon.

The Third Symphony is a unique work and colossal in its conception. It was largely composed in the summer of 1895 after an exhausting and troubling period that pitched Mahler into feverish creative activity. It is the composer’s hymn to the natural world and his longest work. The first movement alone has a duration of between 30 and 40 minutes and forms the first part of the symphony. The second part consists of the other five movements and lasts a further 70 minutes. The work presented a challenging musical experience for contemporary audiences.

Recently discovered in a private collection, Sotheby’s London is delighted to bring this rare, important and beautiful piece of musical history to auction for the first time. The score was sold at £163,250.

* Estimates do not include buyer’s premium