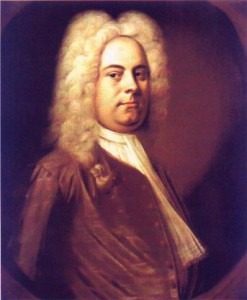 BOLOGNA — “Germanico del sig. Hendl.” Since 1929 the catalog of the Conservatorio Cherubini in Florence (section “Opere teatrali”, p. 143) has listed a Handel title –“Germanico”– not mentioned in any other sources. In autumn 2009 Handel scholars* in both Europe and the U.S. got word that a Bond Street jeweler was circulating a copy of the manuscript in London, attempting to confirm its authenticity. On behalf of whom, we wondered? That mystery was partially solved when, on 18 May, Sony Classical announced on its website that an important press conference would be held on June 6, 11:30 am, at La Scala’s gift shop in Milan.

Meanwhile, a password-protected Web page offered to selected media 12 streamed audio excerpts from the work’s debut recording by discoverer Ottaviano Tenerani and his “Il Rossignolo” ensemble, with a vocal cast of early music specialists. Also included are the sung text, a liner note by Tenerani and the announcement of the forthcoming publication of his edition of the score.

Not everyone is convinced of the authenticity of the project. In his note, Tenerani writes, “We are dealing with a serenata for six voices, written certainly for a private occasion involving the House of Habsburg or one of its supporters. The work is on a large scale (45 numbers including sinfonia, arias and recitatives), complete in one act. The watermarks allow us to assert that its provenance is Venetian, between 1706 and 1709. It is possibly the first dramatic work Handel composed in Italy.”

The chronology of Handel’s Italian trip remains in dispute among scholars, but it is generally assumed to have been between late 1706 and February 1710. The original sung text, on the other hand, unequivocally identifies the person being celebrated as the Habsburg Archduke Joseph, the future Emperor Joseph I. In the libretto’s finale, he is described as a handsome young prince with blue eyes and blond hair — unlike his brother and successor Charles VI, who, in portraits extant today, appears brown-haired and rather ugly like their father Leopold.

The anonymous poet eruditely overlaps the vicissitudes of the War of the Spanish Succession (1701-1713) and the narrative of the Roman historian Tacitus about the triumphant return of the young military leader Germanicus, the adopted son of Emperor Tiberius, to Rome in 16 AD after the Rhine campaign. This suggests that the plot mirrors the events of either 1702 or 1704, when Joseph returned to Vienna in triumph from the two sieges of the fortress of Landau, also by the river Rhine. In May 1705 Joseph became emperor, after which time the allegorical representation of Germanico’s humble submission to his imperial father, as described in the libretto, would have seemed obsolete.

The actual title of the work, nowhere to be found in the score, may have sounded like “Il Trionfo (or Il Sogno) di Germanico.”

Listening to the excerpts suggests the piece to be the work of either Bononcini or Ariosti, while the librettist might be the Neapolitan Donato Cupeda, the poeta cesareo (imperial poet) until 1705, or his vice, Pietro Andrea Bernardoni. Even the tiny facsimile of the opening page provided by Sony raises doubts. Is it possible that a manuscript so formally written by such a careful copyist should lack a normal title-page? The hand that inscribed the attribution to “Hendl” is apparently not the same that has written “Andante” three times over the first bar of the sinfonia. Was the attribution simply a guess, or an attempt to allure a collector?

We await further scholarly investigation to answer such questions. The music, meanwhile, is full of educatedly languid melodies, intriguing ensembles and all the rich instrumentation that the Viennese Hofkapelle could afford. It doesn’t sound like Handel but it is definitely worth hearing.