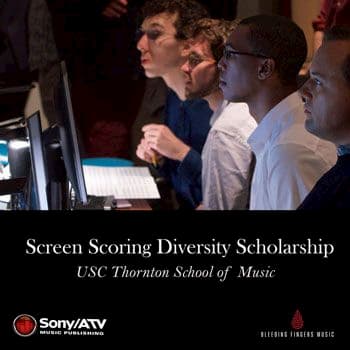 Sony/ATV Music Publishing and Bleeding Fingers Music announced they have established a Screen Scoring Diversity Scholarship for Black composition students within the Screen Scoring Master’s Program at the University of Southern California Thornton School of Music. The scholarship, which is part of Sony Music Group’s Social Justice Fund efforts, aims to encourage inclusivity and expand opportunities for Black composers, who are vastly underrepresented throughout the film and scoring community.

Notable USC Thornton Screen Scoring alumni includes Bleeding Fingers composer Austin Hammonds. Since graduating from the program and joining Bleeding Fingers as a composer, Austin has quickly made a name for himself within the film and scoring community. Full story.