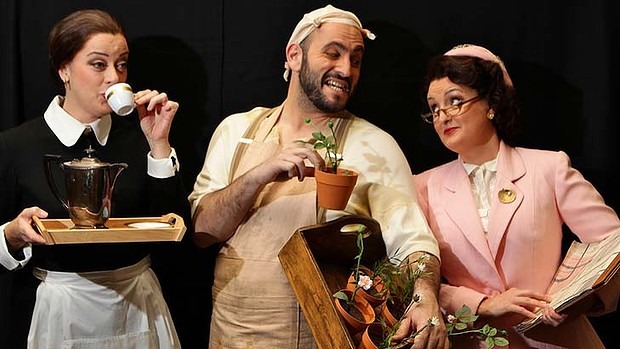 Opera choristers embrace the weird and the wonderful.

For performers who like variety in their work, there’s nothing quite like a job in the Opera Australia chorus. In a typical year – 10 operas – a chorister may be required to play multiple roles, sing in three or more languages, dance, fight, die and perform simulated sex acts.

”It’s like being on a merry-go-round you can’t jump off,” Sharon Olde says. ”Before one opera is finished you’re preparing the next, you’re learning the music, or rehearsing the steps.”

Olde has been a member of the Opera Australia chorus for more than five years. This season she is performing in Tosca, Don Pasquale, La Traviata and Albert Herring. ”And I’m learning the Ring!” she says, laughing. ”But I will get a holiday in September.” For some singers, Olde explains, the chorus is a stepping-stone, a way to accumulate experience and develop one’s voice and acting skills with an eye on becoming a soloist. For others, it’s a job for life.

Lisa Cooper is in her ninth year in the chorus and has done her fair share of what she calls ”the three P’s: prostitutes, princesses and peasants. But it’s not the same every night; it’s not like music theatre. I can be a zombie on Tuesday and a housekeeper on Thursday. I was a pole dancer once in La Boheme.”

”And I was a lesbian,” Olde chimes in. ”La Boheme seemed very grown-up because often what we do is a bit twee. We get to be giggling bridesmaids a lot.”

The men have it a little better, says Ben Rasheed, who has sung with the chorus for two years. ”Some composers wrote more for the men than the women. In the Ring Cycle, for example, there are two huge men’s choruses and the women get 16 bars.”

One of his favourite operas this year was Opera Australia’s startling new production of Verdi’s A Masked Ball, in the Sydney Festival. ”We were all gassed at the end, that was great,” he says.

Cooper adds that some nights, choristers made farting noises while everyone died. ”That was very mature,” she says, laughing.

Rasheed, Olde and Cooper are now rehearsing their roles in Opera Australia’s Don Pasquale. Rasheed plays a number of characters, including a gardener and the notary who marries the elderly bachelor Pasquale to the young widow Norina. Olde plays an interior designer hired to update the look of Don Pasquale’s mansion. Cooper is one of the maids.
”I like this one because we all have different personalities and roles in the household,” Olde says. ”Often, the chorus is a mass of people, so this is a bit of fun for us.” The fun extends to backstage, too, she says.

So what do choristers do between stage appearances? ”It’s all quite conservative,” says Rasheed, who adds that in the old days, choristers were allowed to drink and smoke in the green room. ”There’s the famous story of Dame Joan [Sutherland] coming out of her dressing room and telling people in the chorus off.”

In these enlightened, OH&S-conscious times, Rasheed wiles away his backstage time learning scores for upcoming shows, reading or playing cards. Olde runs a skincare business from her laptop.

”I knit or crochet,” Cooper says. ”There’s a bit of a craft corner in the chorus.”

Nothing distracts from their shared love of music, however. ”We are a true ensemble,” Olde says. ”It’s not about just making your own sound. It’s about being with the people around you. When we make beautiful music together, I still get chills up my spine.”

”It doesn’t matter what sort of day you’re having,” Rasheed says. ”When you walk in and hear that orchestra, nothing else matters. The chorus might not be a lifetime for me, it could be a phase, but right now, I’m really fulfilled by it.”