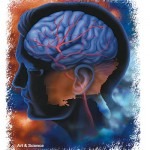 American scientists have restored speech to stroke victims by getting them to sing words instead of speaking them, a leading neurologist said.


Gottfried Schlaug, an associate professor of neurology at Beth Israel Deaconess Medical Centre and Harvard Medical School, showed a video of a patient with a stroke lesion on the left side of the brain who was asked to recite the words of a birthday song. The patient could not comply, and merely repeated the letters N and O. But when Schlaug asked him to sing the song, the words “happy birthday to you” came out as clear as day.

“This patient has meaningless utterances when we ask him to say the words but as soon as we asked him to sing, he was able to speak the words,” Schlaug said at the annual meeting of the American Association for the Advancement of Science.

Another patient was taught to say “I am thirsty” by singing, while another who suffered a large lesion on the left side of the brain – and had tried various, ultimately unsuccessful therapies for several years to try to regain the power of speech – was taught to say his address.

Images of the brains of patients with stroke lesions on the left side of the brain – which is typically used more for speech – show “functional and structural changes” on the right side of the brain after they have undergone therapy through song – music intonation therapy, or MIT.

Although medical literature has documented the phenomenon of people who are unable to speak being able to utter words when singing, Schlaug was the first to run a randomised clinical trial of MIT, with a view to gaining acceptance of the therapy in the medical field.

How MIT works is not clear, but another study presented at the meeting by Aniruddh Patel of the Neurosciences Institute showed grammatical processing of language and music overlaps in the brain.

Schlaug said music helps link parts of the brain that usually do not engage when a person speaks. “Music-making is a multisensory experience that simultaneously activates several systems in the brain and links and loops them together.”